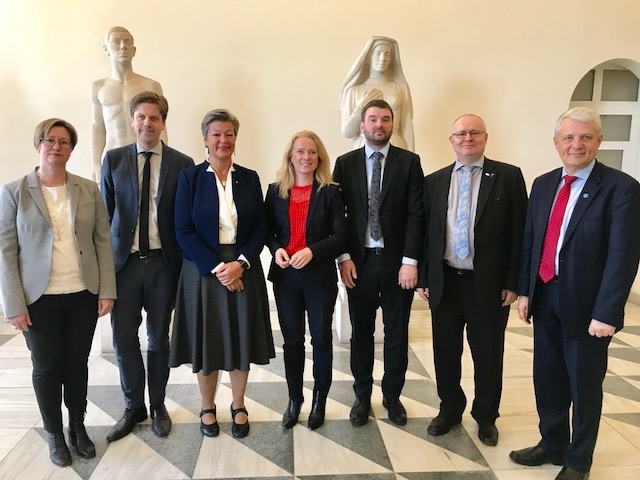 Companies should compete on knowledge and skills, not on low pay, poor working conditions and saving money by ignoring health and safety in the workplace, according to the declaration by the Nordic Council of Ministers for Labour, which they will submit to the European Commission.

Orderly conditions on the labour market are a priority for the Swedish Presidency of the Nordic Council of Ministers 2018.

“It is a priority because illegal employment practices have become more widespread. We face similar challenges throughout the Nordic Region and have much to learn from each other. In particular, we all have much to learn from Norway, which has made great progress in combating these problems,” said the Swedish minister, Ylva Johansson, at the start of the meeting.

Norway has seven special centres that combat illegal working practices, where police officers and officials from the tax authority and the health and safety agency jointly monitor the situation and crack down on non-compliant workplaces. As illegal practices have spread from the construction industry to many other parts of the economy, trade unions and employers have devised industry-specific programmes of countermeasures.

All of the ministers at the meetings shared information about what has worked well in their countries.

Jari Lindström (Finland), reported that his country has made great strides in combating cash-in-hand work in the construction industry.

“The key was getting unions, employers and official agencies to work together to combat the problem, e.g. introducing identity cards on building sites to show that the people who are working there are registered for tax,” he said.

At the moment, the Nordic countries are working together on a system of joint inspections of workplaces and evaluating what works when it comes to informing employees and employers about their rights and duties.

European body may be on its way

The EU Commission recently adopted a proposal to set up a European Labour Authority to inform people in companies that work across borders of their rights and duties.

The Nordic declaration is a form of input into that process, illustrating what the countries think about fair competition and fair working conditions and making the Commission aware that the member states have different ways of dealing with the problems.

The Nordic ministers point out, for example, that all of the Nordic labour market models involve free collective bargaining between unions and employers on employment conditions, which puts them in a strong position to tackle unfair competition and poor working conditions.

The ministers give their full support to free movement for workers and services but reiterate this must not lead to fraud and systematic exploitation.