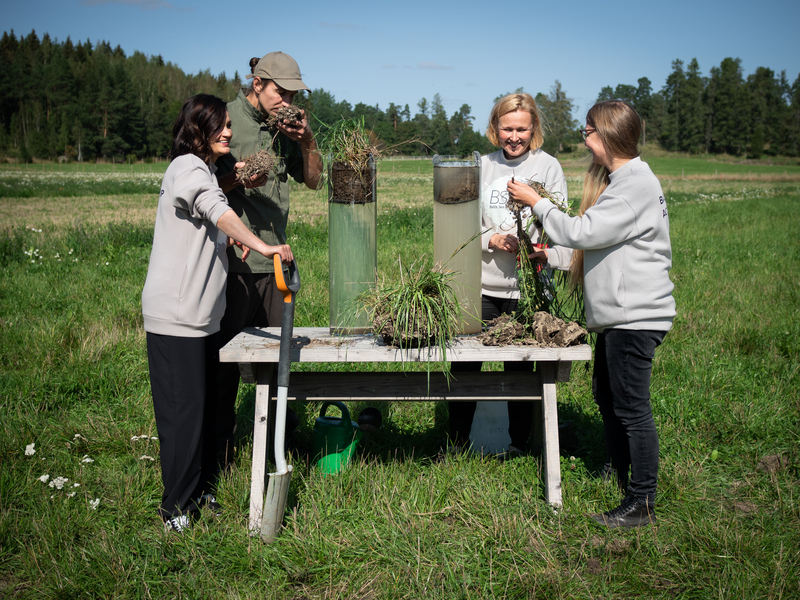 Carbon Action has been nominated for the Nordic Council Environment Prize 2021.

It is estimated that around 1,500-2,400 gigatons of carbon are stored in the top layer of soil, which extends to a depth of 1-2 metres. That’s about three times more than the total amount of carbon in the entire atmosphere. It is also about 300-500 times the annual CO2 emissions caused by fossil fuels. Even a small change in the carbon deposits in the soil would thus have a big impact on the CO2 content of the atmosphere. To reverse the global – and Nordic – trend and create more carbon sequestration in the soil, we need to understand how carbon works in soil. The Carbon Action Network, which was founded by the Baltic Sea Action Group, brings together farmers, advisors, researchers, businesses and policy-makers in this work. One hundred carbon storage farms in the Carbon Action project are testing methods of regenerative cultivation, and sharing their experiences in the network. Carbon and food are thus harvested simultaneously. The project brings together stakeholders and carries out high-quality scientific research, and an extensive regenerative research network has been formed through the project.

For food production to be considered sustainable, the food must be produced locally where possible, using environmentally sustainable methods. In agriculture, the emphasis is on recirculated plant nutrition and environmentally friendly farming practices that take into account greenhouse gas emissions and carbon sequestration, biodiversity and good management of water resources. Those engaged in animal husbandry and fish farming accept an environmental responsibility and maintain high standards of animal welfare. Natural resources used for food, such as game, wild fish and other natural products, are exploited wisely.

When ingredients are processed into food products, as much as possible of their nutritional content is preserved. There is no waste of resources in the food industry, products are packaged in an energy-efficient way and the environmental impact of distribution is minimised. Companies and retailers offer customers sustainable alternatives, and minimise food waste through their own initiatives. The food that consumers buy is based on environmentally sustainable alternatives, such as vegetarian food adapted to the seasons. We eat as many calories as we need, no food goes to waste and organic waste is recycled.

Contact information
Josefine Carstad
joscar@norden.org
(+45) 22 35 70 13
Silja Elvarsdóttir
silja@nordichouse.is
Nordic Council Environment Prize
The purpose of the prize is to raise awareness of environmental work in the Nordic Region.
How can we help you?
More