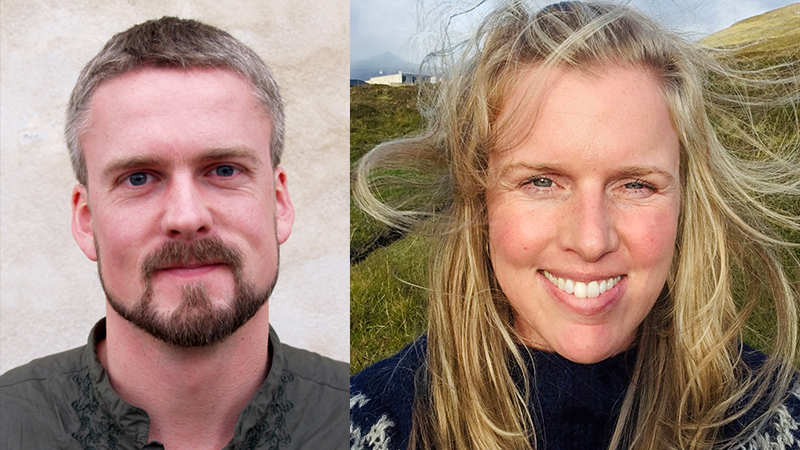 In this picture book, which at one and the same time exudes humour, sadness and hope, we share as readers in a small boy’s close relationship with his grandfather. With the boy as the narrator, we follow the two while when they’re out feeding the ducks down by the duck pond, when grandad tells stories, and when the boy stays with grandad. Halfway through the story, however, we receive some clues that everything is not as it usually is – and it turns out that the grandfather’s memory is starting to fail. With the boy’s mother as intermediary and guide, the picture quietly changes, and by the end of the book it is the boy who is helping his grandfather, where previously it was the other way around.

With dementia as an underlying theme, this picture book is part of a trend that has dominated in recent years within Nordic children’s and youth literature. Successfully communicating about such a serious subject, which many would regard as unsuitable for children, requires a certain degree of ingenuity and warmth. With a wonderful balancing act between light and darkness, Dánial Hoydal and Annika Øyrabø master exactly this. The text and pictures merge into a whole, in which humorous rhymes and sayings and the cosy atmosphere of the grandfather’s home stand in stark contrast to the centre picture of the story, where the two no longer find any joy in their otherwise pleasant trips to the duck pond. At the end of the book we are once again down at the duck pond, but this time the symbolic sunset, together with the grandfather’s rediscovered humour, casts a warm light on the otherwise hopeless situation.

With her paper collages, Annika Øyrabø stands out as a picture book illustrator. In the style of William Heinesen, rocks and stones come alive, and links are forged with ancient Faroese folklore. In addition, the many small details, such as a sock on one of the bed legs, and a cat on the curtain rod, are reminiscent of the Swedish picture book author, cartoonist and illustrator Sven Nordqvist. In extension of the text, the pictures manage to shed light on the grandfather’s memory loss when we see, for example, a fridge full of things that do not belong there. Once again, humour and melancholy are combined and speak to the emotions of both the child and the adult.

Dánial Hoydal is a Faroese writer and translator. He holds an MA in rhetoric and informatics, and works as an independent advisor in communication and marketing. Dánial Hoydal made his debut as a writer in 2002 with his picture book Í geyma, illustrated by Hanni Bjartalíð. He has since written the manuscript to Faroese operas and musicals, and has also translated several musicals into Faroese. Annika Øyrabø is a Faroese/Danish designer and illustrator. She studied at the Danish Design School from 2000-2007, and at Hochschule für Angewandte Wissenschaften in Hamburg. Since 2013 she has published a number of hobbyist books in German and Danish. She made her debut as a picture book illustrator in 2014 with the Dutch picture book Pas op voor wilde Wesley, written by Elle van Lieshout and Erik van Os. Besides Abbi og eg og Abbi (2021), she has in collaboration with the author Aðalbjørg J. Linklett illustrated the picture book Langa Lina langomma (2021), in which old age is also a recurring theme.