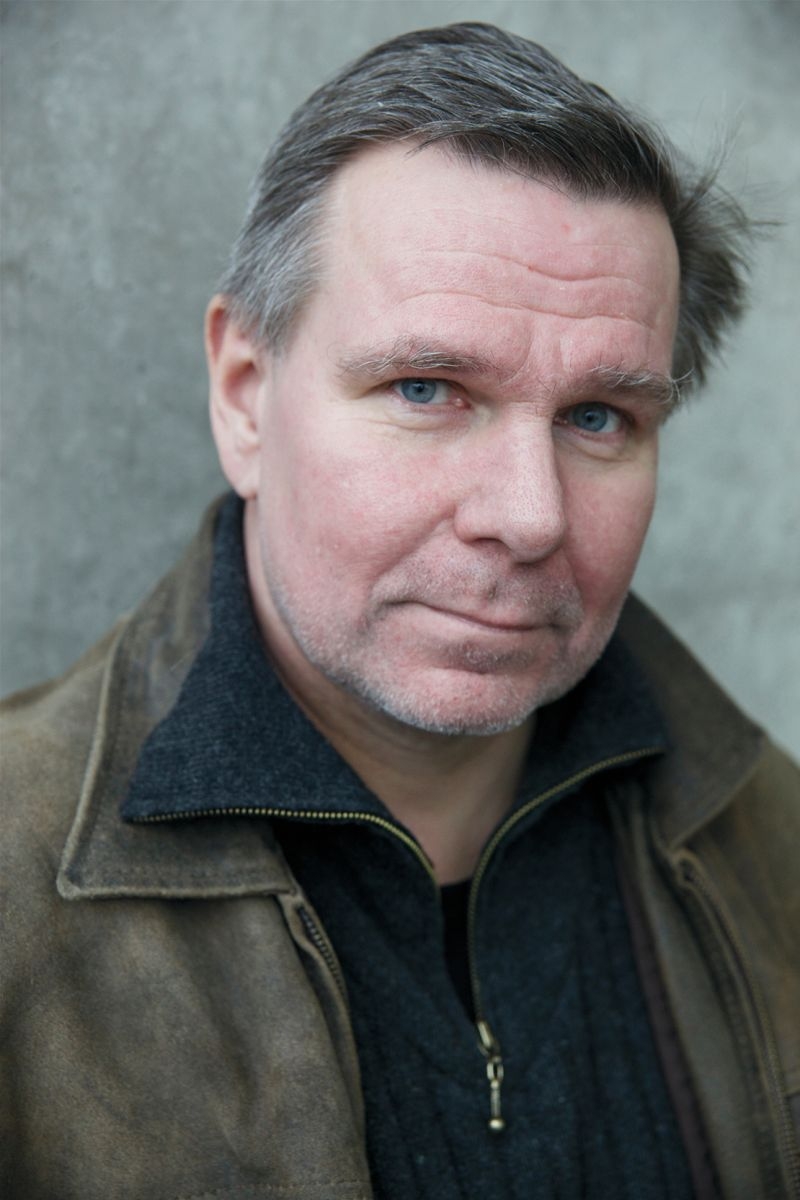 With sixteen published works to his name, Hannu Raittila (b. 1956) has become firmly established as a key contemporary Finnish author. He received the Finlandia Prize for his novel Canal Grande (2001). His current novel Terminaali (2013), in English “Terminal”, was awarded the Runeberg Prize in 2014 and was a contender for the Finlandia Prize the previous year.

Raittila’s novels and essays have been referred to as “engineer’s prose” because of the way he likes to portray the world in technological terms. In Raittila’s fictional world, technological innovation and quantifiable things symbolise man’s creative power and ability to influence his surroundings. At the same time, there is a paradoxical idea of hubris; an effort to create magnificent works which falters as a result of megalomania. In Raittila’s reality, faith in technology strives to replace God’s creation, but a world built on technology proves to be a deeply vulnerable, crumbling illusion.

Where in Canal Grande, Raittila moves his protagonist to Venice to prevent the city from sinking into the sea, Terminaali deals with the world at large, both at sea and in the air. The story is apparently about a broken family seeking togetherness, but ultimately it depicts Western culture as doomed and the collision of eastern and western spheres of existence.

Raittila develops the novel by creating parallel micro and macrocosms. He cultivates analogies and portrays the family’s problems by way of comparison with the inward and outward movements of the continental shelf. “Even people recede from and approach one another in mysterious cyclical movements – even the members of a family.” The original core of the family now reduced following a tragic farewell, it ultimately experiences something akin to the harmony in the Finnish midsummer light.

Raittila associates the destiny of the Finnish Lampen family with the global crisis triggered by the events of 9/11 in 2001. The novel’s chronology follows the time before and after the atrocity. The daughter Paula, who calls herself Laura like the main character of the TV series Twin Peaks, is on a flight to the US when the towers collapse and she ends up stuck indefinitely at a Canadian airport terminal. Terminals and ports become familiar places to Laura, who together with her companion Sara engages in a girlish subculture; hanging about airports becomes a lifestyle. The airports and travelling are a new religion in a time of materialism, and their rituals are reminiscent of spiritual rites.

It is from the perspective of Laura’s diaries that the novel provides the reader with an insight into her world. We find out about her life path: after multifarious experiences and changes of identity, she ends up with a Palestinian terrorist and dies a martyr. Thematically, however, Laura’s Swedish-speaking father, Johan, and his wife, Pirjo, serve as the real protagonists. As narrator, Johan becomes aware of his interest in technology when he is travelling around the world as a border patrol officer. He starts searching for his daughter, whom he last saw as an infant. For her part, Pirjo’s involvement is as a newscaster and representative of media technology in a story about the world as shared living room increasingly subject to manipulation.

The technique for showing perspective that Raittila has chosen provides the novel with a range of discourse and stylistic devices. There are Laura’s naive diary entries and Johan’s profound self-analyses, the occasional emotionally charged outbursts from Pirjo and Sara’s disassociated reports. The novel is in constant motion, the plot maintaining constant tension right until the end. Each chapter introduces fresh dimensions into this well-structured whole.

The novel contains a wealth of intertextual elements. You will find references to Biblestories and Homer’s Odyssey, as well as to modern classics such as Joseph Conrad's Heart of Darkness and the realist narrative tradition of Väinö Linna. In his ability to make universal statements, in his own way Raittila is continuing Linna’s work, but broadens its reach to include global reality.

The novel’s title, Terminaali, is a clear reference to airport terminals, but it can also be viewed as epitomising the negative consequences of excessive globalisation. The technology behind the networks for communication leads to new conflicts which threaten both the environment and culture generally. The eschatological world that the novel depicts has declined into ill health and is entering its terminal stage, which could be a dead end.