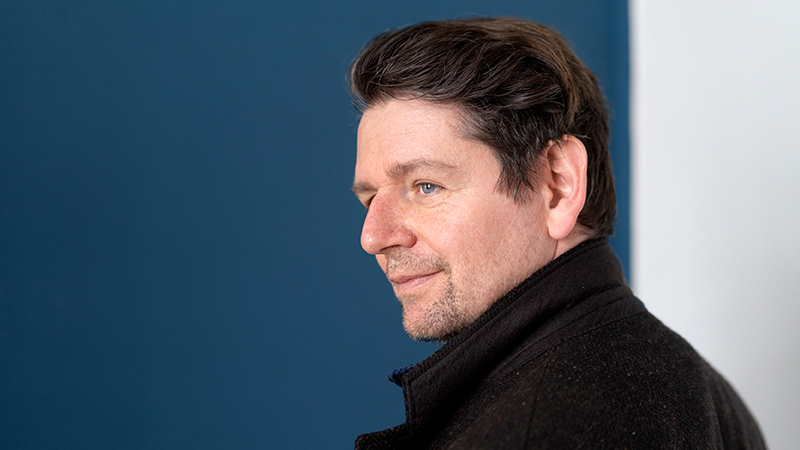 O PO POI (not translated into English) is nominated for its playful joy in storytelling, its considerable wealth of meaning, and its special humour and deep originality. O PO POI manages to expand our notions of what a children’s picture book story can look like.

The story has the structure of a three-layer cake – expressed through tales, narrators, characters and places where events unfold at varying degrees of intensity.

In the uppermost layer of the story, the characters Duck, Rabbit and Monkey are in a rubber boat out at sea. Duck tells the other two the story of ‘the two cats, the cousin of one of them and the time the moon fell down’. In the middle layer of the story, we meet the two cats. The cat in the green hat tells the story of its cousin to the cat in the brown hat. The story of the cousin forms the bottom layer of the narrative – and now things start to get dramatic: ‘Where my cousin lives, one day the moon fell down!’ We see how the great yellow moon lands with a huge splash that takes up so much room on the page that all the humans are crushed together at the bottom in a chaos of colour, distorted bodies and horrified faces – Cousin Cat watches it all. And on the following pages the cake structure becomes quite literal, with an illustration that reproduces the three layers, one on top of the other. The two uppermost layers later prove to be similarly dramatic.

The three stories each have the character of a fable with a universal message, for example about cause and effect, about telling and understanding a story, and about prejudice and alienation.

The text is simple and clear, the language full of playful inventiveness (‘BIP BANG CLAP! it said’) and the colours are strong and bright. In all of the colour surfaces, patterns are formed of the kind that children will recognise from colouring in with the markers you can buy in supermarkets and toy shops. The patterns cause the drawings to stand out and vibrate within the strong black outlines that separate the figures and objects from each other. There are a thousand things to look at on every page, and for those readers who wish to delve deeper into the many layers of meaning, there are also plenty of things to talk about.

O PO POI is one of those books that can be read again and again and which, with each reading, has something new and surprising to offer. As a reader, you must be prepared to open your mind, say yes and hop on for the ride – and if you do that, a very special and unusual experience awaits you.