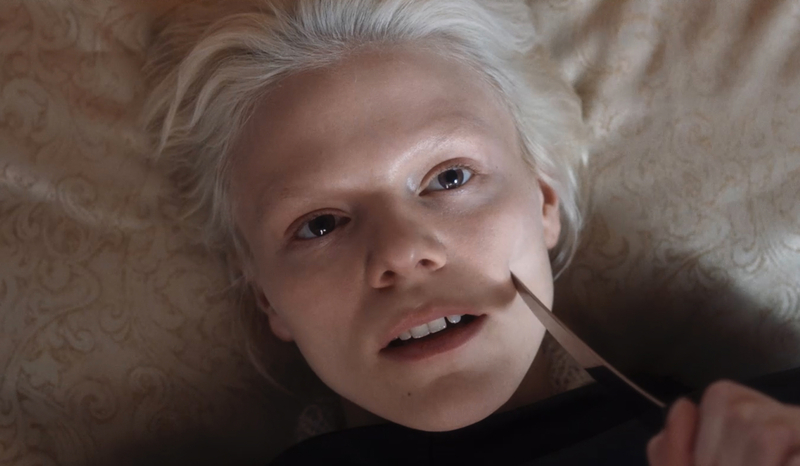 Photographer
DUOProductions
Mail Facebook Linkedin Twitter
The film “Alma” from Iceland has been nominated for the 2021 Nordic Council Film Prize.

After having witnessed her father’s brutal murder, three-year-old Alma and her mother fled their war-torn homeland and settled in Iceland. Now, 25 years later, Alma is serving time in a psych ward for murdering her boyfriend, a crime she can’t remember. But when she discovers the boyfriend is still alive, Alma decides to escape and kill him after all.

Like all the other female inmates in a facility for the criminally insane, Alma has been convicted of murdering her male partner. To these women, the crash of the Icelandic economy in 2008 represents the potential collapse of the patriarchal order under which women have been abused, raped and mistreated through the ages and in whose prosperity they have had no share. This metaphor poignantly sets the stage for this multi-layered tale.

What starts out as a noir-ish revenge fable becomes a beautiful love story that centres around the process through which a victim of abuse finds her way through trauma and grief to finally rediscover her roots and her distinctive voice.

Kristín Jóhannesdóttir (1948) is a veteran film and theatre director.She has a Master’s degree in literature and cinema from Paul-Valéry University, France as well a degree in film direction from the Conservatoire Libre du Cinéma Français in France. Jóhannesdóttir directed her first feature film Rainbow’s End in 1982. Her second feature As in Heaven was officially selected, out-of-competition at the Cannes Film Festival 1992 and went on to win 12 international awards. She has also directed music videos, shorts, films for television, and radio plays as well as staged a number of works for the Reykjavik City Theatre and National Theatre of Iceland.

Jóhannesdóttir has been on the selection committee of the Icelandic Academy of the Arts. From 2015 to 2018, she was appointed member of the Council for Icelandic Cinema by the Icelandic Ministry of Culture.

Þórhannesdóttir graduated from Cambridge University in the UK with a BA and MA in literature and history. She went on to study film theory at the British Film Institute/University of London. Over the last 13 years, she has produced a dozen short films, feature-length films and television series that have received wide international acclaim. Those include Country Wedding (2008), the first feature film directed by celebrated editor Valdís Óskarsdóttir (Eternal Sunshine of the Spotness Mind), Friðrik Þór Friðrikssons’s film Mamma Gógó, and the television series Season of the Witch. She co-produced, among others, the Nordic Council Film Prize winner 2014 Of Horses and Men by Benedikt Erlingsson, Maximilian Hult’s Hemma and Pity the Lovers, Vera Sölvadóttir’s series Life After Death, and Elfar Aðalsteins’ End of Sentence. Alma by veteran director Kristín Jóhannesdóttir premiered in Iceland on 7 May 2021.

Guðrún has also held various positions in the film industry, such as director of the Reykjavik Film Festival and Nordisk Panorama, Head of International Relations for the Icelandic Film Centre and drama buyer for RÚV.

Friðrik Þór Friðriksson (1954) is one of Iceland’s most illustrious filmmakers/producers. He runs the production company Spellbound with Guðrún Edda Þórhannesdóttir.

Friðriksson has been one of the driving forces behind the development of the Icelandic film industry since the 1980s, and is still playing a pivotal role in nurturing new talent as a producer. He gained international recognition as a director and producer with his second feature film Children of Nature (1991) which was nominated for Best Foreign Language Film at the Oscars. Other acclaimed features that he has directed include Cold Fever, Movie Days, Angels of the Universe, Devil’s Island, and Mamma Gógó. As a producer, Friðriksson continues to be prolific. Directors that he has worked with include Ragnar Bragason (Fiasco, 2000), Hal Hartley (No Such Thing, 2001), Hilmar Oddsson (Cold Light, 2004), Benedikt Erlingsson (Of Horses and Men, winner of the Nordic Council Film Prize 2014), and Ari Alexander Ergis Magnússon (Mihkel, 2018). His latest production for Spellbound, Alma, was released in Iceland in May 2021.

Ødegård studied history, media and cultural management at university. He produced his first feature film in 1989/90 and has since produced or co-produced more than 40 feature films, including most films by Friðrik Þór Friðriksson and a few features by Baltasar Kormákur, such as The Deep, nominated for the Nordic Council Film Prize 2013. Alma is his latest production. He is a member of the European Film Academy.