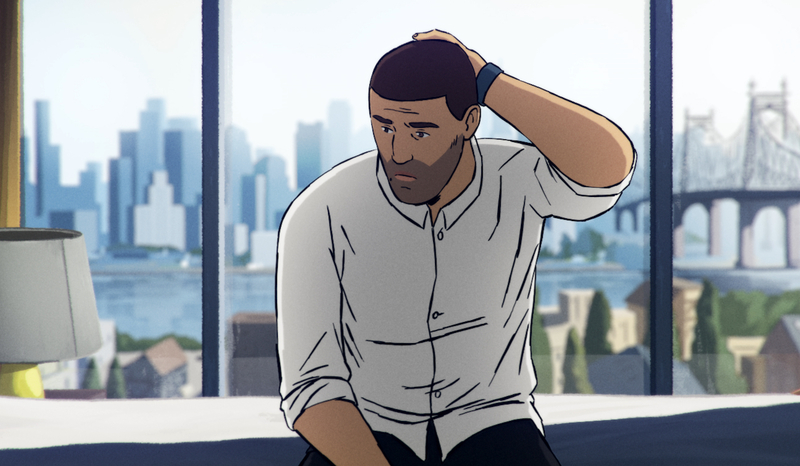 Photographer
Final Cut for Real
Mail Facebook Linkedin Twitter
The film “Flee” from Denmark has been nominated for the 2021 Nordic Council Film Prize.

Flee tells the extraordinary true story of a man, Amin, on the verge of a marriage which compels him to reveal his hidden past for the first time. This secret that he has been hiding for over twenty years threatens to ruin the life he has built for himself. He recounts his dramatic journey as a child refugee from Afghanistan to Denmark. Told mostly through animation, Flee weaves together a tapestry of images and memories to tell the deeply affecting and original story of a young man, grappling with his traumatic past in order to find his true self and the meaning of home.

It is rare that the aesthetic, political, and human dimensions merge into such a sublimely artistic whole as in Flee. In the animated documentary film, the director’s childhood friend, Amin, tells for the first time his dramatic story as a homosexual refugee from Afghanistan at a time when he is facing a major turning point in his life in Denmark: He is getting married.

The film plots a concrete, soul-shattering fate for the refugee debate of the time, but also enables the viewer to easily get acquainted with Amin’s general and existential doubts, which the film uncovers with a delicate and at times funny sense of details and moods.

The animation brilliantly solves two practical challenges of anonymity and lack of visual material. The stylish execution both elevates the narrative to a sensuous experience, from the depiction of a happy childhood in Afghanistan to the brutal fleeing to Europe.

Flee tells a pertinent, relevant, and touching story that all people, regardless of their ethnicity, age, and sexual orientation, deserve a happy childhood and a safe country to live in.

Danish/French writer/director Jonas Poher Rasmussen (1981) graduated from the Danish film school Super16 in 2010. He made his debut in 2006 with the acclaimed television documentary Something About Halfdan, followed by a series of radio documentaries. His first feature film Searching for Bill - a mix of documentary and fiction - won the Nordic:Dox Award at CPH:DOX 2012, and Best International Film at Docaviv. His documentary What He Did won the FIPRESCI Award at the Thessaloniki Film Festival 2016. His animated documentary Flee was officially selected at Cannes 2020 and went on to win numerous prestigious awards at world festivals in 2021, including the Grand Jury Prize at Sundance, the Dragon Award-Best Nordic Documentary in Gothenburg, and the top Cristal Award-Best Feature at the Annecy International Animated Film Festival 2021.

Monica Hellström holds a MA in film from the University of Copenhagen in Denmark and a BA in film from the University of Bedfordshire in the UK. She has worked as an in-house producer at Denmark’s Final Cut for Real since 2010. Hellström previously worked at Upfront Films and at the Danish Film Institute’s Film Workshop. She was selected for ‘Producer on the Move’ in Cannes 2020. Over the last 10 years, she has worked on more than 20 films, including Daniel Dencik’s Moon Rider, Reel Talent Award winner at CPH:DOX 2012, Simon Lereng Wilmont’s Chikara: The Sumo Wrestler’s Son (2013), The Fencing Champion (2014) and The Distant Barking of Dogs, winner of more than 30 awards including Best First Appearance Film at IDFA 2017. Her documentary He’s My Brother by Cille Hannibal and Christine Hanberg won a Special Mention at CPH:DOX 2021 and the Audience Award at DOK.fest München 2021 in Munich.

Among the animated projects produced at Sun Creature are the Cartoon Network’s TV series The Heroic Quest of the Valiant Prince Ivandoe and the upcoming Netflix series Splinter Cell based on the Ubisoft video game. Flee is de La Gournerie’s first feature-length animated feature film.

Signe Byrge Sørensen (1970) is a producer and CEO of Denmark’s leading company Final Cut for Real, twice Oscar-nominated for the documentary films The Act of Killing and The Look of Silence.She holds a Master’s degree in international development studies and communication studies from Roskilde University (1998), Denmark, and is a EURODOC and EAVE graduate.

Sørensen has been a producer since 1998, first in SPOR Media, then in Final Cut Productions Aps. In 2009 she and Anne Köhncke founded Final Cut for Real. She has produced more than 50 documentaries from around the world including South Africa, Zimbabwe, Senegal, Thailand, Indonesia, Colombia, Argentina, in addition to Scandinavia. Besides Joshua Oppenheimer’s internationally acclaimed The Act of Killing and The Look of Silence, Sørensen’s production credit includes the 2016 Prix Europa nominee Les Sauteurs, 2020 CPH:DOX Award winner Songs of Repression, 2021 Sundance Special Jury Award-World Documentary winner President and 2021 CPH:DOX Award-Special Mention winner Our Memory Belongs to Us. Sørensen was celebrated by her peers with the Roos Award (2014), the Timbuktu Prize (2014) and the Ib Producer award (2016).