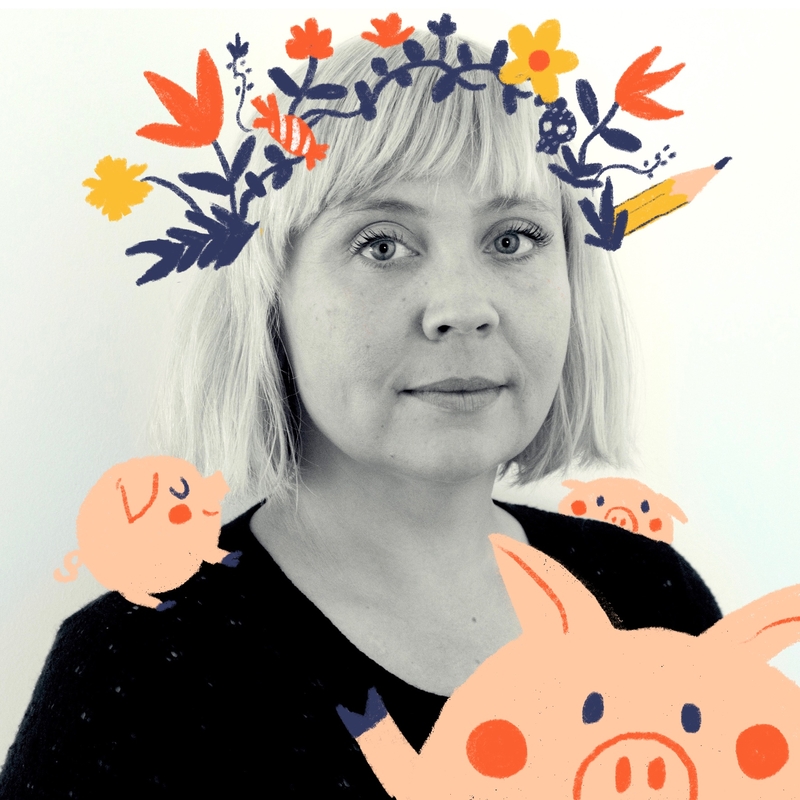 The wonders of everyday life are the hallmark of this beautiful, heart-warming book: a both witty and strange indoor adventure, in which you can easily take a break for a bit more cocoa and toast.

At long last, it’s the summer holidays for the twins Inga and Baldur. They are looking forward to relaxing to cartoon films and letting the darkness and the school year seep out of them. But their plans go awry, because at home in the kitchen they find “a sobbing little troll, a little giant or a very big neighbour” in a state of violent emotion. Albert is a white-bearded, solitary old man who lives on the top floor of the housing complex where the twins live with their mother.

The kids do not much like this intrusion by this big wet blanket, but their mother cannot help but invite the grief-stricken man to dinner. Over the meatballs, the twins feel the urge to cheer Albert up. Balder is worried because the man is so alone, and so Inga rushes out and gets her brilliant invention: The illness box. It contains, amongst other things, a book of jokes, glitter slime, a conjuring set and a small computer game from when mother was young. But not even the glitter slime gets the old man into a better mood.

At last Albert succeeds in putting his great sorrow into words. Alma has disappeared: The world has swallowed his twin sister and his only friend, who is sailing around the world on a passenger ship. He hasn’t received a postcard from her for many weeks, and he doesn’t know what to do with himself. The only sign is the last postcard she sent, in which Alma wrote that she was on her way to Pig Fjord. The little family helps Albert to get a plane ticket, a passport and a credit card, and they promise to water the flowers while he is out in the world looking for his sister.

The small quirks and the great joy of colour in the illustrations fill Grísafjörður (‘Pig Fjord’, not translated into English) with ebullient beauty. In some passages the pictures and the text coalesce into comic strips, which are fun to study carefully and which provide an amusing insight into the characters’ emotional lives. The twins are opposite poles – Balder is timid and Inga bold – and their ideas about the world are hugely different. However, the relationship between them is both solid and valuable. They are good friends who support each other, and in this way they reflect Albert and Alma and their lifelong friendship.

The stage of the story becomes larger as the world is brought into the children’s homes via Albert’s letters, and while packages from him are opened, the reader gains an insight into the daily lives of the children and their mother. The old-fashioned shipments also link the generations, both spiritually and materially, and reading them gives the twins a glimpse of the wider world. The Swiss Alps, about which Albert tells the children in a letter, are recreated in the children’s play in the form of mountain ridges made of furniture and freshly-washed laundry.

Grísafjörður raises important questions about the growing distance between people, generations and neighbours. Do we set ourselves too many boundaries that are difficult to cross? Could it be beneficial to have an unexpected visit at some point? This turn into a gentle discussion about isolation and loneliness, which can plague both the young and the older generation, but it also shows how to counter this threat with warmth and love. The story contains an appeal to its group of readers to think about other people, even if you would much rather just relax with cartoon films.

Lóa H. Hjálmtýsdóttir is a trained visual artist, has attended writing school, and lives in Reykjavík. She is a visual artist and the lead singer in the band FM Belfast. Grísafjörður, Lóa’s first children’s book, won the Bookstore Prize and was nominated for the Icelandic Literary Prize 2020.