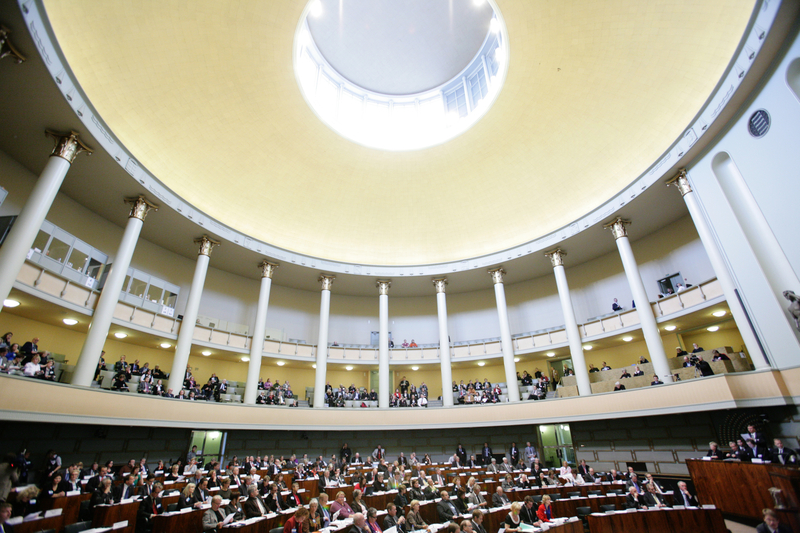 Photographer
Foto: Magnus Fröderberg/norden.org
Mail Facebook Linkedin Twitter Sign up to newsletter
The Nordic Council has released a new handbook for parliamentarians, Clever climate legislation. The handbook prepares parliamentarians around the world for the important task of achieving the climate goals of the Paris Agreement of 2015.

The handbook, written by former Danish MP and Nordic Council environmental politician, Steen Gade, provides insights into the political mechanisms behind the international climate negotiations that led to the Paris Agreement. It introduces a range of tools that parliamentarians can use to influence climate policies in their own countries, as well as the international efforts to achieve the targets defined by the agreement.

The Nordic Council hopes the handbook can inspire current and future generations of parliamentarians to become more forceful in the effort to limit the dangerous effects of global climate change.

When the Foreign Minister of France, on December 12th, 2015 at the COP21 (Conference of the Parties) was able to declare the Paris Agreement as adopted, the assembled delegates broke into standing and prolonged ovation. And precisely at that moment, a major responsibility was thrown directly into the laps of the national parliamentarians.(Citation from Clever climate legislation)

"Parliamentarians all around the world are faced with an enormous task, which is to provide the legislative basis for the solutions needed to mitigate climate change," says Britt Lundberg, President of the Nordic Council. "Maintaining the world on course with the goals of the Paris Agreement requires wise and effective climate legislation."

The Paris Agreement however, is only the beginning of the shift towards a low-carbon future. It is based on climate targets and plans submitted by each nation, which are to be confirmed and revised every five years, for the first time in 2020. Clever climate legislation thus describes how parliamentarians can work towards creating efficient national climate policies and ensuring that the submitted targets and plans are continuously redefined and raised to new levels.

The handbook describes key aspects of Nordic, European and international climate policy, introduces forthcoming crucial events, and refers the reader to scientific data on climate change, including the assessment reports of the Intergovernmental Panel on Climate Change. Parliamentarians are encouraged to work closer together across borders and take political decisions that support the technological development necessary for the transformation.

Moreover, the handbook provides advice on how to exert further influence on global climate policies, e.g. by increasing focus on reducing emissions from international shipping and aviation, which are currently not regulated by the Paris Agreement.

"Parliamentarians all around the world must hold their governments accountable for their commitments and work towards including these important sectors in future climate agreements," says Bärbel Höhn, former MP and Head of the Environmental Committee of the German Bundestag. "Drawing on Steen Gade’s decades-long experience of international climate negotiations, the handbook provides useful insights into the tools and processes necessary to achieve this."