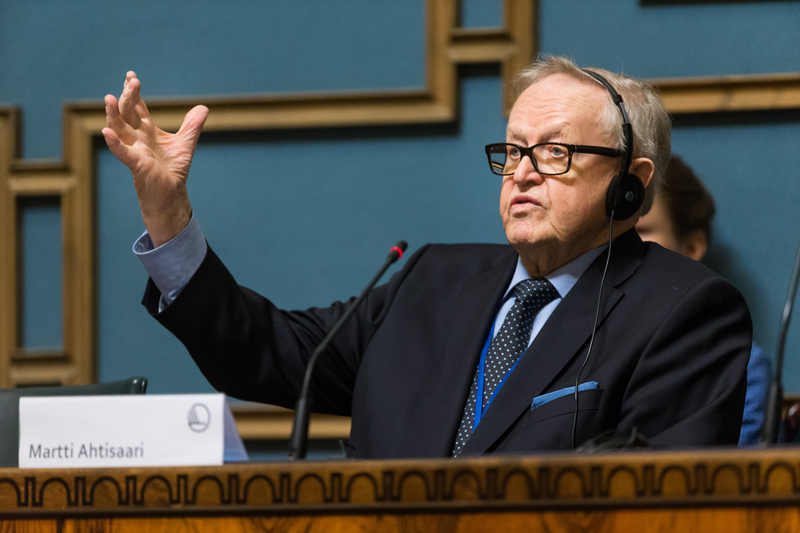 Photographer
Magnus Fröderberg/Norden.org
Mail Facebook Linkedin Twitter Sign up to newsletter
“Having faith in fair and equal societies forms the basis for successful peace mediation.” This was the message of Nobel Peace Prize Laureate and former Finnish president Martti Ahtisaari when he spoke to the members of the Nordic Council today. He also said that he views NATO as a peace organisation.

“In analysing the state of the world in 2017, we see that crises almost always have one common denominator: inequality,” said Ahtisaari, and continued:

“Peace mediation is about much more than the division of power. It’s about politics, psychology, equality, justice, reconciliation, and societies that function effectively at all levels. Everything that we have succeeded in in the Nordic Region.”

Ahtisaari was invited to the Session of the Nordic Council in Helsinki in connection with a proposal to strengthen Nordic peace mediation.

The proposal was raised by the Centre Group and is based on carrying out a new study – Stoltenberg II – on how the Nordic Region can help to bring about peace in areas of conflict.

In addition this includes a proposal for a joint higher education degree in peace mediation, as well as a peace mediation archive in one of the Nordic countries.

Documents from the Second World War

The archive will contain documentation from peace negotiations since the Second World War.

“If you succeed in achieving all this, I’ll be happy,” commented Ahtisaari, who challenged Nordic politicians to uphold and promote Nordic values each and every day.

“I’m convinced that I wouldn’t have achieved so much in terms of peace mediation without my Nordic roots and values,” he said, calling himself “a very proud product of the Nordic model.”

In the debate that followed, Ahtisaari said that Finland should be a member of all western, democratic organisations, specifically mentioning NATO.

The statement was welcomed by Hans Wallmark of the Conservative Group:

Christian Juhl of the Nordic Green Left replied that he hoped for a better correlation between preventative and military measures in the future.

“What I want to emphasise in this project is that we’re taking a very small step towards using slightly less economic and technical capacity with regard to military intervention, and using slightly more of a peacebuilding capacity,” he said.

The Stoltenberg report mentioned in the debate is available in Norwegian here: