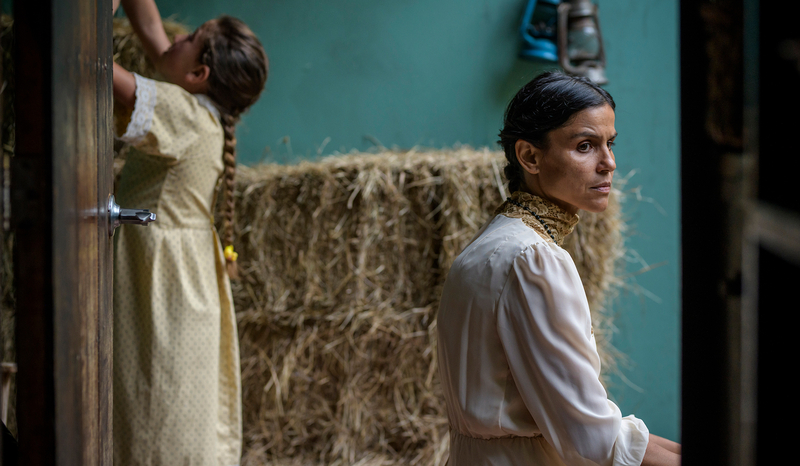 Clara, 40, is believed to have a special connection with God. As a healer, she sustains a family and a village in need of hope, while she finds solace in her relationship with the natural world. After years of being controlled by her mother, Clara’s sexual impulses are stirred by her attraction to her niece’s boyfriend. This new force takes Clara into unexplored territory, allowing her to cross physical and mystical boundaries. Empowered by her self-discovery, she gradually frees herself from her role as a saint and begins to heal herself.

With Clara Sola, Nathalie Álvarez Mesén invites the audience into a world that is at the same time self-evident and completely new and unique, both magical and internally logical. To be a feature film debutant, with the ability and confidence to create such a unique universe, and to master all aspects of the craft with such a steady hand – that’s a lot more than merely impressive. Together with her protagonist Wendy Chinchilla Araya and photographer Sophie Winqvist, she’s made a sensual film about sexuality and the fight for freedom, in which you can get a sense of the smells and tastes, feel the skin under your fingertips, and feel the power of nature around you.

Maria Camila Arias (born 1985), is a Colombian screenwriter based in Montreal, Canada. She first studied history of art and film, and specialised in screenwriting at the Vancouver Film School. She wrote the script for Ciro Guerra’s acclaimed Birds of Passage, then collaborated with Matias Meyer on the Mexican film Modern Loves. She co-wrote Clara Sola, with writer and director Nathalie Alvarez-Mesen. The magical realistic drama was launched at Cannes Directors’ Fortnight in 2021.

Nathalie Álvarez Mesén (born 1988) is a Costa Rican/Swedish screenwriter and director. After undertaking work experience in theatre in Costa Rica, she studied mime at Stockholm’s University of the Arts. She then graduated from New York’s Columbia University with an M.F.A. in film directing and screenwriting. After several shorts, including the Venice Orizzonti Best Short Between You and Milagros which she co-wrote, she made her directorial debut with Clara Sola in 2021. After its world premiere at the Directors’ Fortnight, the film has gone on to win more than 15 international awards. Álvarez Mesén is working on her second film The Wolf Will Tear Your Immaculate Hands.

Nima Yousefi (born 1981) is a producer and partner in the production company HOBAB, which he joined in 2010, after completing his studies in economics and philosophy at Stockholm University School of Business. Keen to combine arthouse sensitivity with mainstream appeal, Yousefi has co-produced a handful of multi-awarded films: the 2018 Finnish film Stupid Young Heart by Selma Vilhunen, the 2019 Icelandic film A White, White Day by Hlynur Pálmason, and the 2022 film Beautiful Beings by Guðmundur Arnar Guðmundsson. He has produced the feature debuts of Finland’s Hanna Bergholm (Hatching) selected for Sundance 2022, and Nathalie Álvarez Mesén’s Clara Sola.