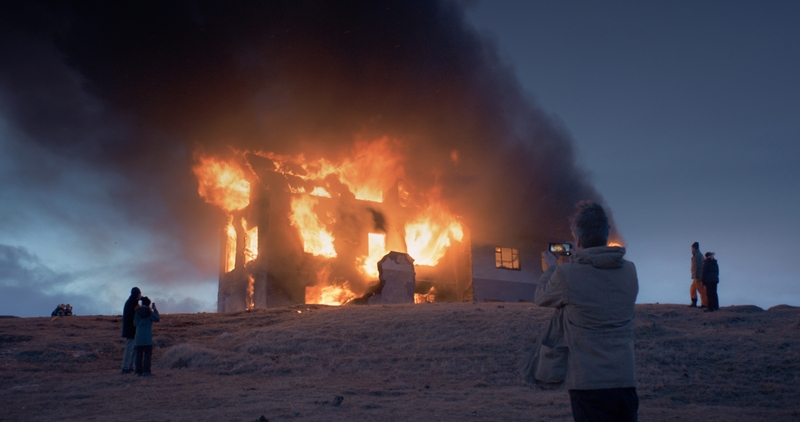 Iceland, Christmas time. As everyone prepares for the holidays, a peculiar mood takes hold of the country, revealing emotions of both excitement and concern. In the middle of the countryside, an abandoned farm is burning. In a school, a children’s choir is singing Christmas carols. In a slaughterhouse, chickens are parading along a rail. In a museum, a mother is arguing with her ex-husband on the phone. In a living room, a young girl is making her grandmother try on her new virtual reality headset… Through 56 such scenes, Echo draws a biting and tender portrait of modern society.

Rúnar Rúnarsson’s Echo is a compilation of concurrent micro-stories, framed within the time around Christmas and New Year’s Eve – a time which is both sensitive and ceremonial. A time when we reconsider our lives and a time when, more than usual, we miss the loved ones who can’t be with us. The stories have an open beginning and an open end; each story is a slice of life.

Echo is about materialism and consumer society, togetherness and loneliness, love and violence, and life and death, which has its own timing. The religious and ceremonial is juxtaposed with the trivial and the mundane – as in life itself. Moreover, the film draws attention to more controversial matters such as the refugee crisis. Echo is a cutting, in-depth study of our society and its layers, and the storytelling can be described as poetic realism, an ode to our daily lives and its beauty and cruelty. Very Icelandic, yet universal.

The script is full of beauty and poetry; each scene is one static shot, one beautifully composed and well-thought-out angle with strong film grammar and excellent filmmaking. The score is modest, yet impressive and moving.

Rúnar Rúnarsson (born 1977) graduated from the National Film School of Denmark in 2009. His short film The Last Farm was nominated for an Academy Award in 2004 and was followed by 2 Birds, which was nominated for a Palme d’Or at the Cannes Film Festival in 2008. His debut feature film, Volcano, had its world premiere at the Cannes Directors’ Fortnight in 2011 and won Best Film, Best Director, and Best Screenplay at Iceland’s national Edda film awards. His sophomore feature film, Sparrows, had its world premiere at the Toronto International Film Festival and won 17 international awards, including the Golden Shell-Best Film at San Sebastián in 2015. The following year it was nominated for the Nordic Council Film Prize. Echo is Rúnarsson’s third feature film. The ensemble piece of 56 scenes, set between Christmas and New Year, had its world premiere at the Locarno International Film Festival, where it collected the Youth Jury Prize. Other world festival kudos include Best Director at Valladolid and Best Film from the Interfilm Church Prize at Lübeck.

Live Hide (born 1988) graduated from the University of Copenhagen with a master’s degree in Film Studies in 2014. She started her career at SF Film Production Denmark, where she was hired as production assistant for Bille August’s Balladen om Marie Krøyer, and Jørgen Leth’s documentary I am Talking to You. In 2014, she joined Nimbus Films. She was production assistant for Itsi Bitsi and Satisfaction 1720 and assistant co-producer for Marius Holst’s Congo, and she produced the web series Løbeklubben. Her most recent production is Rúnar Rúnarsson’s film Echo, which had its world premiere at the Locarno International Film Festival.

Lilja Ósk Snorradóttir (born 1977) holds a BSc in Business Administration and has been working in the film industry for more than 20 years. She is co-owner of Pegasus Pictures, which was founded in 1992, and has been managing director of the company since 2010. Her production credits include the television series The Lava Field (Best TV Drama at Iceland’s national Edda film and television awards in 2015) and Ísold Uggadóttir’s multi-awarded short film Revolution Reykjavik. She co-produced the director’s debut feature film And Breathe Normally (Best Director-World Cinema Dramatic Competition at the Sundance Film Festival 2018). Her other co-productions include Anton Sigurðsson’s Graves & Bones and the English-language thriller Arctic, starring Mads Mikkelsen, which had its world premiere as a midnight screening at the 2018 Cannes Film Festival. Echo is Snorradóttir’s second collaboration with Rúnar Rúnarsson after Sparrows, which she co-produced in 2015. At Pegasus, Snorradóttir has been servicing mega productions such as HBO’s Game of Thrones and Succession and Sky Atlantic’s Fortitude. Her current projects include the Danish co-production Oh to Be a Butterfly by Søren Kragh-Jacobsen.