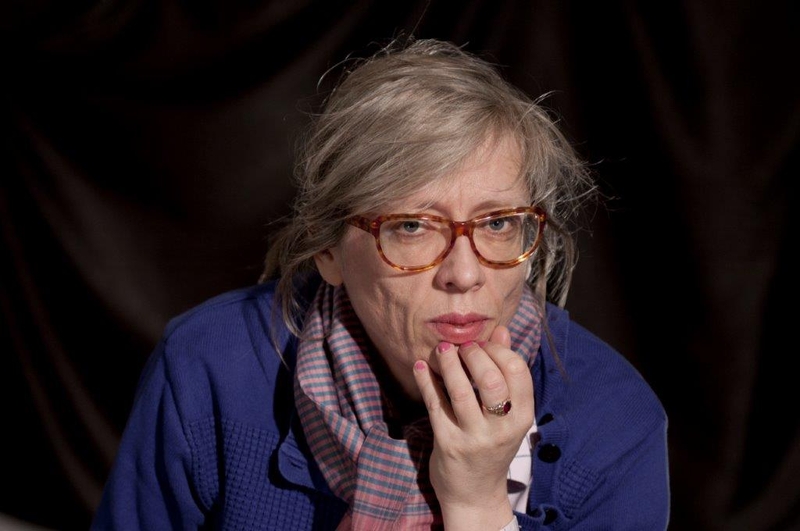 In the poems of Kristín Ómarsdóttir, innocence looks like a splat of yoghurt on the wall. The letter under the pillow asks: Are you there? The mirror captures the narrator’s picture as he combs his morning-pink hair, land-dreaming mermaids stick their heads up out of the sea, there are advertisements for glass breasts and the square is captured by the horizon as though with a lasso. Kristín Ómarsdóttir has always challenged the elasticity of language. Her original imagery is surprising and sometimes surreal.

Kristín works interchangeably with poems and novels, short stories and plays, and has received numerous awards for her works. Her novel Elskan mín ég dey (“I’m Dying Now, Darling”) was nominated for the Nordic Council’s Literature Prize in 1999, while her play, Ástarsaga 3 (“Love Story no. 3”) was nominated for the Nordic Dramatist Award in 1998. In 2005 she received the Icelandic Grímuverðlaunin prize as playwright of the year for the play Segðu mér allt (“Tell Me Everything”), and for the poetry collection Sjáðu fegurð þína (“Look at your beauty”), she received the Icelandic Fjöruverðlaunin prize in the Fiction and Poetry category in 2008. Kristín has also worked with visual art, and has exhibited drawings and participated in exhibitions in which she has worked with various art forms, such as video and sculpture. Her books have been translated into Swedish, Finnish and French, and her poems have been published in foreign anthologies.

When the book Kóngulær í sýningargluggum (“Spiders in the display windows”) appeared, a well-known Icelandic critic wrote: “Kristín manages to fascinate and to scare, to make you cry and make you happy, all at once.” She masters the form of the novel and play, but it is as a poet that her skills are best expressed, as the book Kóngulær í sýningargluggum clearly shows.