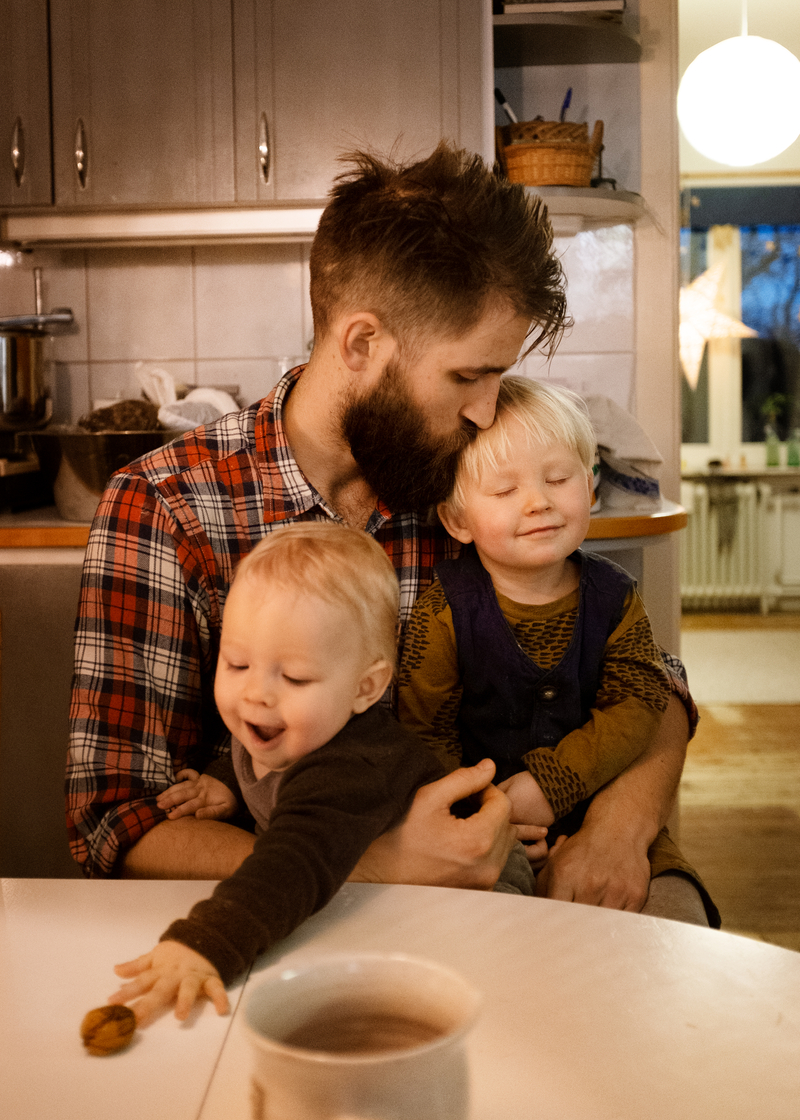 Photographer
Moa Karlberg
Mail Facebook Linkedin Twitter Sign up to newsletter
Launching today, the report State of Nordic Fathers finds that 90 percent of Nordic fathers want to be heavily involved in the care of their small children. Yet they don’t feel that other men accept this. The report seeks answers to why fathers in the Nordic countries only take between a 10 and 30 percent share of parental leave.

The report is based on responses from more than 7,500 men and women from all five Nordic countries. They answered questions on how competent they feel as parents and how important it is to evenly share the childcare responsibilities, and on how they believe their colleagues and employers would react if they were to take a long period of parental leave.

Gap between words and reality

The report shows that satisfaction regarding parental involvement is roughly the same for men and women in the Nordic Region.

In addition, more than 70 percent of mothers and fathers in the region believe that parental leave should be shared equally.

The keen commitment to and support for the equal sharing of parental leave is in stark contrast to reality – on average, fathers in the Nordic Region still only take a 20 percent share of parental leave.

Associate Professor in business economics at Stockholm University and author of the report, Carl Cederström, has analysed the survey responses and summarised them in ten key findings.

Men believe they already do half of the work

One key finding is that fathers in the Nordic Region believe that responsibility for the home and children is already shared fairly.

Two-thirds of men responded that they and their partners share the childcare work equally, while less than half of women agreed.

More than half of women believe that they do most of the work.

While 55 percent of men say that they do half of the day-to-day planning around picking up the children from daycare, children’s activities, clothing, and hygiene, only 33 percent of women agree.

Several of the findings show a strong and consistent connection between longer paternity leave and changed attitudes.

Fathers who take longer parental leave do a greater share of the work around the home. They increasingly seek information about parenting in books or from friends.

They also agree to a lesser extent with gender stereotyped statements such as “a child needs their mother more than their father” or “men should act strong even if they feel scared”.

A sense of guilt in relation to colleagues

The results from the report confirm earlier studies showing that men are afraid their taking parental leave will be punished in the form of career setbacks.

If a substitute does not take their place while they are on leave, they feel a sense of personal guilt in relation to their colleagues who have to do their job.

However, State of Nordic Fathers also shows a clear difference in attitudes between men who take a long period of leave (two months or more) compared with those who take a shorter period.

Work at the same time

Fathers who take a short period of parental leave, or none at all, are more afraid that taking leave will worsen their relationships with their colleagues and managers, and have a negative impact on their salary and career development.

Fathers who take a short period of parental leave are more likely to work during that time and state that they sometimes need to put work before their children.

Fathers who have taken a longer period of parental leave are more optimistic in relation to the attitudes of their managers and colleagues, and are less afraid to miss out on career opportunities and salary growth.

They are also less afraid to request flexible working hours that enable them to drop off and pick up their children from daycare.

“For policy-makers and politicians the findings should be read as an invitation to facilitate the situation for fathers so that they can take leave without worrying about career penalties and financial constraints,” writes Carl Cederström.

In addition, Cederström notes that the Nordic countries differ when it comes to the uptake of paternity leave.

In Denmark and Finland, fathers take around 11 percent of total leave. In Norway, this rises to around 20 percent, and in Sweden and Iceland to around 30 percent.

The differences depend on whether the countries use earmarked quotas for paternity leave to encourage fathers to take more, such as in Sweden, Iceland, and Norway, or whether the system is flexible, like in Denmark and Finland.

“​​Paternity leave quotas are proven to be the most effective way of encouraging men to stay at home with their young children longer. This is a necessity if we are to change the norms in the labour market and families,” writes Cederström.

The report is part of the 2019 State of the World’s Fathers report, and is produced by the international organisation for men and gender equality, Promundo.

State of Nordic Fathers is the first Nordic regional report.

The report was commissioned by the Nordic Council of Ministers within the scope of The Nordic Gender Effect at Work, which is the Nordic prime ministers’ initiative for the international exchange of knowledge on gender equality in the labour market.

The report has been written by Carl Cederström and edited by the Swedish organisation Män.

How the countries stand out: