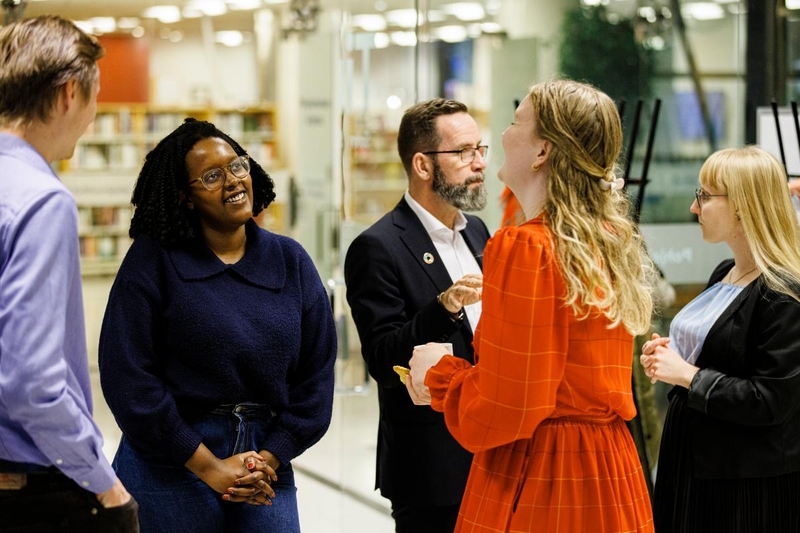 From the event “We have a dream – Solutions and demands by young people” organised by the Nordic Council in the Nordic HUB in Helsinki.

Mail Facebook Linkedin Twitter Sign up to newsletter
From Greenland joining the Paris Agreement to debates on gender-balanced climate policies and the announcement of the new €115 billion Climate Investment Coalition. Enjoy a selection of highlights from the Nordic Pavilion during the recent Climate Summit in Glasgow.

For the sixth time in a row, the Nordic voice was strong at the UN Climate Summit. A two-week programme brought together partners from across the globe, including UN agencies, Scottish government bodies and Nordic governments and institutions, to team up and work on climate issues together.

This year a twin pavilion based in Helsinki provided a backdoor to the COP and facilitated a multitude of local climate events supporting the main pavilion in Glasgow. With a total of just over 100 events, 3,000 visitors at the pavilion in Glasgow and close to two million views on our livestreams across all channels, the two pavilions proved to have a broad reach.

1. A key feature throughout the programme was the daily lunch briefing with Nordic climate negotiators and other experts. They provided insights into the status of the negotiations and an introduction to the intricacies of climate policy.

2. The pavilion also served as the backdrop for the announcement of several concrete climate actions. For example, on the very first day of COP, the Greenlandic Premier Mute B. Egede declared that Greenland was joining the Paris Agreement after years of deliberation.

3. Designed to foster dialogue across continents, the talk series “Nordic Talks” joined us in Glasgow. Under the headline “Inspire to Act – Act to inspire”, the concept and podcast were a perfect match for the pavilion's purpose. The talks during COP26 spanned a wide range of issues, from Nordic Climate Leadership to Green and liveable cities in Africa.

Much of the focus at COP26 was on how to fund new climate measures and compensate for loss and damage already incurred, especially by the most vulnerable countries. Two major initiatives to enhance climate funding were launched at the Nordic Pavilion.

4. The Nordic prime ministers announced an initiative by Nordic and UK pension funds to invest €115 billion in clean energy and climate initiatives by 2030 as part of the Climate Investment Coalition. It is an excellent example of the important role of public-private partnerships to speed up action on the climate. The Nordic Council of Ministers is providing direct support to the initiative in the form of funding to help bring more donors on board.

5. Monitoring the effects of climate change is also costly and the World Meteorological Organization, in conjunction with the UNEP and the UNDP, launched a new funding mechanism, strongly supported by several of the Nordic countries, to improve the surveillance of extreme weather conditions in the most vulnerable countries in the world.

Core components of the programme were a strong focus on contributions from young experts and the mainstreaming of gender and equality perspectives within the overall framework of sustainable development.

6. Gender equality is a Nordic priority. On Gender Day at COP26, this was manifested by a debate on the results of a new study supported by the Nordic Climate and Air Working Group on how to ensure greater gender balance in climate policies.

7. An overall highlight of COP26 was the strong engagement by young experts and activists. This shone through at the event “We have a dream – Solutions and demands by young people” organised by the Nordic Council, at which the Nordic Youth Biodiversity Network presented a position paper based on input from 3,000 people submitted to the Nordic governments.

The climate crisis calls for a rethink of how we live and how we administer natural resources. Two new Nordic programmes to that effect were launched during COP26.

8. A big part of the green transition takes place in private homes, and the Nordic Region has a long way to go when it comes to sustainable consumption. The “Sustainable Lifestyle” programme is a cross-sectoral initiative that aims to help people make smarter green choices and rethink their consumption patterns.

Watch the lively debate from the launch in Helsinki.

9.   Improvements to natural carbon sinks like oceans, forests and peatlands can have a major positive impact on climate change and biodiversity. During Cop26, the programme “The Nature-Based Solutions Vision 2030 Project” presented 8 case studies and 10 policy options from the Nordic countries and made a strong case for nature-based solutions as a way forward.

10. Midway through COP26, the Nordic Climate Action Talk Show highlighted some of the core issues at stake, with a special focus on just transition, the role of sustainable food systems and cultural life as change makers with huge potential to increase the amount of action on climate issues. The role of climate communication was also discussed with the heads of communication from the UNFCCC and the IPCC.

That brings us to the end of our 10 highlights. To check out all of the Nordic COP26 events, please visit our distribution partner We Don’t Have Time, the world's largest social media network on climate issues:

In 2019, the Nordic prime ministers signed a declaration aimed at making the Nordic Region the most sustainable region in the world by 2030. Part of this vision is to engage in the international climate arena. Where better to do so than at the UN Climate Summit, COP26, which took place November 1–12 in Glasgow.

Contact information
Josefine Carstad
joscar@norden.org
(+45) 22 35 70 13
All events at our COP26 pavilion in Glasgow
See the full program from our pavilion in Glasgow. The Nordic countries will join forces when the COP26 UN climate negotiations take place in Glasgow from 31st October to 12th November. The Nordic countries have ambitious climate goals and we strongly believe that we can do more by working together.