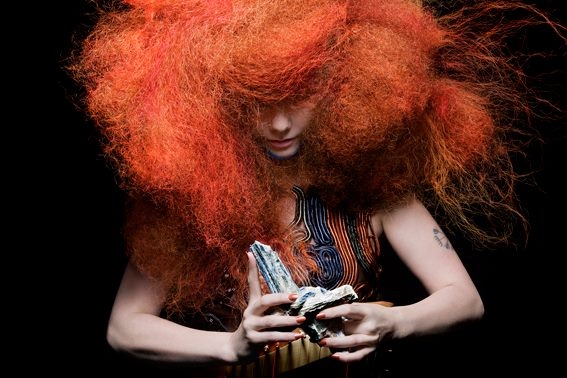 Mail Facebook Linkedin Twitter Sign up to newsletter
The Icelandic celebrity Björk, along with a number of scientists and artists, has evolved her groundbreaking album Biophilia into innovative teaching materials. The Nordic Council of Ministers will now be the channel to spread this out to schools in all the Nordic countries.

Nordic co-operation around the Biophilia teaching project was launched at a big event in Reykjavík's concert house Harpa in November. The project is one of the flagships of Iceland's programme for the Presidency of the Nordic Council of Ministers now in 2014 but will run till 2017.

The Biophilia teaching project has been developed by the singer Björk in partnership with leading Nordic artists and scientists. One of the main aims is to encourage children's curiosity in natural science and teach them to think more creatively.

In the middle of November 2014, teachers from the five Nordic countries, the Åland Islands, the Faroe Islands and Greenland, met to launch Biophilia. (See a video from the workshop).

"There is a strong tradition in the Nordic countries for creative and interdisciplinary work at all levels in education. It is an important part of Nordic upbringing which we hope that we will be able to boost with Biophilia", say project managers Arnfridur Valdimarsdottir and Auður Rán from Iceland.

Each of the participating countries has set up a steering group and chosen the local area where they will teach Biophilia next year.

The Nordic dimension in the project will strengthen teaching co-operation in and between the participating countries to develop a web-based platform based on Nordic experiences of using the Biophilia teaching materials. These materials and experiences can then be used in different disciplines in all Nordic schools in the future.

The following areas/towns have been chosen for the pilot project:

Biophilia is an interdisciplinary teaching project focusing on creativity. The Biophilia method tries to change the traditional way of teaching. It is based on the fundamental idea that it is best for children to start practising art with a creative process, where music, science and technology are linked in a new way. At the same time it will stimulate their interest in learning more about nature, the environment and the climate around them.

Teachers, researchers, scientists, artists, entrepreneurs and other participants work across disciplines and school classes, subjects, science and art forms to introduce creativity as an educational method and, simultaneously, to stimulate greater environmental awareness in pupils and students.

Biophilia is a three-year project, in which 2014 has been a preparatory year. The actual project will be implemented in 2015 in the Nordic participating countries and 2016 will be used for evaluation and processing the experiences.

The project started in Iceland where the musician Björk Gudmundsdottir developed the method in partnership with the University of Iceland and the City of Reykjavík Council, based on her album Biophilia from 2010.

The Biophilia album was the world's first music app and precisely as the first app ever it has been included in the collection at the Museum of Modern Art, MoMa, in New York.

Read more about NordBio, which includes the Biophilia educational project, on www.norden.org/bioeconomy