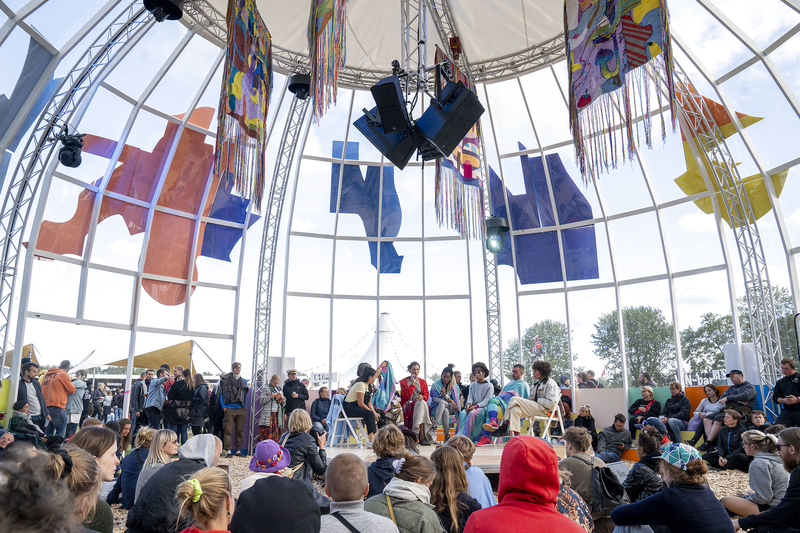 Photo from Art Zone at Roskilde Festival 2019. A festival that integrates sustainability into everything it does, from food stalls to waste management.

Mail Facebook Linkedin Twitter Sign up to newsletter
Sustainability was the recurring theme for the second online meeting of the Nordic Council of Ministers for Culture (MR-K) during the Danish Presidency. The ministers discussed the priorities that the culture sector will need to pursue in order to achieve the Council of Ministers’ new vision. They also exchanged views on how to do this while also encouraging a Nordic sense of community, development and co-operation in the sector throughout the Region.

The role of culture in the green transition was in focus when the culture ministers met for the second time this year on Wednesday. The new programme for co-operation 2021–2024 and the budget for next year were also on the agenda. COVID-19 may have had a major impact on the form meetings and work have taken this year, but the ministers have not let any of that lower their ambitions or put a halt to the development of Nordic co-operation on culture.

“It has been a different type of Presidency. We haven’t been able to sit down in a room with our Nordic colleagues and talk about cultural policy. Fortunately, our online meetings have worked well, and we have still been able to make important decisions,” says Joy Mogensen, the Danish Minister for Culture and chair of MR-K. She was speaking after the second online meeting of the year, the agenda for which included priorities for the next few years.

“It is clear to see that co-operation on cultural policy is very close in the Nordic Region – even at a turbulent time for the sector – and that ambitions for the future remain high. Art and culture are crucial to the Nordic sense of affinity, to the social commitment and participation of our people and to the sustainable development of the Region. All of this will be reiterated when we present the new co-operation programme 2021–2024 in January,” the minister points out.

Culture builds bridges – including in work on Vision2030

Culture and the media play crucial roles in Nordic co-operation, and were, in fact, the very basis for the Nordic Council of Ministers when it was set up in 1971. Books, TV shows and music from the neighbouring countries are often the first points of contact.

Culture also provides arenas for the public to meet and helps us understand and address global challenges like the climate crisis and the corona pandemic. The fact that cultural co-operation acts as a key driver for the green transition in the region is also reflected in the Council of Ministers’ action plan for Vision2030.

“Working together on culture and understanding each others’ languages are fundamental to Nordic co-operation. They are also recurring themes in our work on the vision of making the Nordic Region the most sustainable and integrated region in the world by 2030. Prime examples of the contribution made by the culture sector to our work on the action plan include efforts to boost children and young people’s understanding of neighbouring languages and cultures, the multi-sectoral initiative on sustainable lifestyles and the work on democracy, inclusion and solidarity in the Nordic Region,” says Paula Lehtomäki, Secretary General of the Nordic Council of Ministers.

The new programme for co-operation 2021–2024 will be based on the Council of Ministers’ Vision2030 and its three strategic priorities – a green, competitive and socially sustainable region – as well as an action plan with tangible objectives. It will be published in January 2021 when Finland takes over the Presidency of the Nordic Council of Ministers.

The formal decision on the Nordic Council of Ministers’ total budget for 2021 will be taken by the Ministers for Co-operation at the end of November.  The savings announced in the culture budget for the year stem from the proposal for the overall budget.

Contact information
Elisabet Skylare
elisky@norden.org
+45 2171 7127
Jesper Smed Jensen
jesjen@norden.org
Session Week 2020
The coronavirus pandemic may have made it impossible to hold a proper plenary Session, but important political summits will be held, and Week 44 will still be the highlight of the Nordic political year.
How can we help you?
More