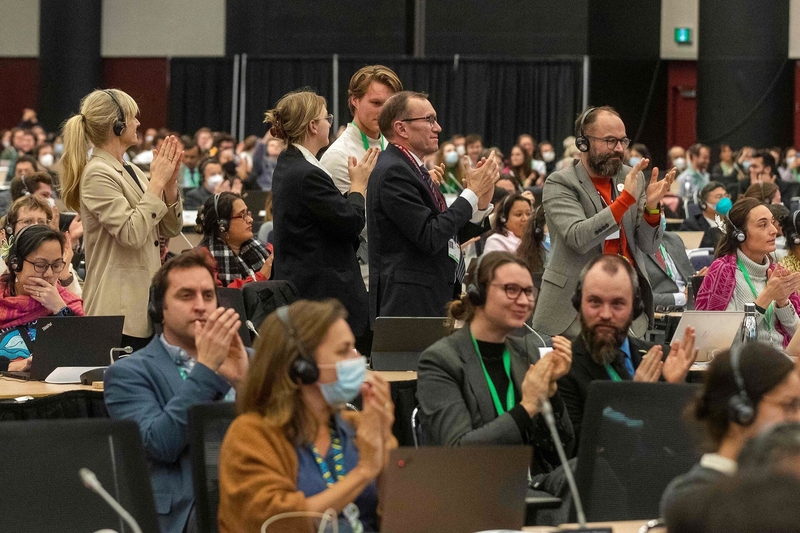 Photographer
Lars Hagberg/AFP/Ritzau Scanpix
Mail Facebook Linkedin Twitter Sign up to newsletter
The world’s governments managed to reach a historic agreement on the protection of nature after protracted negotiations at COP15 in Montreal, Canada. The new global agreement includes nature-based solutions, which the Nordic governments are pleased about. But the youth movement is critical of the terminology and fears that it will lead to greenwashing.

In the early hours of Monday morning, a new UN agreement, a global rescue plan for Earth’s biodiversity, was hammered out.

The environment ministers from Sweden, Finland, Norway, and Greenland were on site together with researchers and environmental movements from around the world, as well as a sizeable group of youth representatives from the Nordic countries. In the final days, environment and climate ministers stepped in as negotiators.

One of the many issues discussed during the negotiations concerned nature-based solutions.

This relates to how nature and its various ecosystem services can be used to reduce climate effects and air pollution, such as the restoration of marshland and wetlands to collect water runoff and reduce greenhouse gas emissions.

Maria Ohisalo, Finland’s Minister of the Environment and Climate Change, said during the negotiations in Montreal that “nature-based solutions are the key to stemming the loss of biodiversity and limiting the climate impact.”

Strong connection to the climate

“Nature plays a huge role in the solution to the climate crisis. Forests, marshes, land, and seas are all carbon sinks. Diversity in nature dampens the consequences of climate change, such as flooding, erosion, and extreme weather,” said Ohisalo.

Earlier this autumn, the Nordic environment and climate ministers issued a declaration on nature-based solutions for the first time, undertaking to do more with such measures.

And in the new agreement that has now been adopted, nature-based solutions are mentioned as a means of restoring, preserving, and promoting nature’s contribution to humanity and as a means of reducing the effects of climate change.

The youth movements that participated in COP15 have pointed out that nature-based solutions can be a good tool, but only if we define “nature” carefully and do not include monocultures such as newly planted forests.

“End the dependency on fossil fuels!”

“What we really need to do is end our dependency on fossil fuels and overconsumption. I worry that nature-based solutions will become a kind of greenwashing, something we do so that we can keep on consuming and using fossil fuels as usual,” said Norway’s Jonas Kittelsen, member of the Nordic Youth Biodiversity Network.

“If we make connections between nature-based solutions and the political goals of net-zero carbon dioxide emissions, the complexity of biodiversity becomes part of a mathematical puzzle,” he says.

The youth movements also called for clearer formulations stating that the rights of indigenous peoples should be mentioned at the same time as talking about nature-based solutions.

Solutions must benefit nature and the climate

Jóna Ólavsdóttir, who heads the Nordic Council of Ministers’ project “Nature-based solutions in the Nordic Region”, is hoping for more projects in the Nordic countries, projects that must strictly adhere to the criteria adopted by the UN.

“For us, it’s important that we adhere to the UN’s definition of nature-based solutions, so that we ensure we’re not contributing to greenwashing. Nor should we support projects that benefit biodiversity but disadvantage climate adaptation, or vice versa,” she says.

Initiatives from the Nordic Council of Ministers

Researchers believe that nature-based solutions could account for a third of the reduction in greenhouse gases required to achieve the goals of the Paris Agreement.

They can also help to stem the loss of biodiversity.

Below you can read more about Nordic co-operation’s initiatives and reports relating to nature-based solutions: