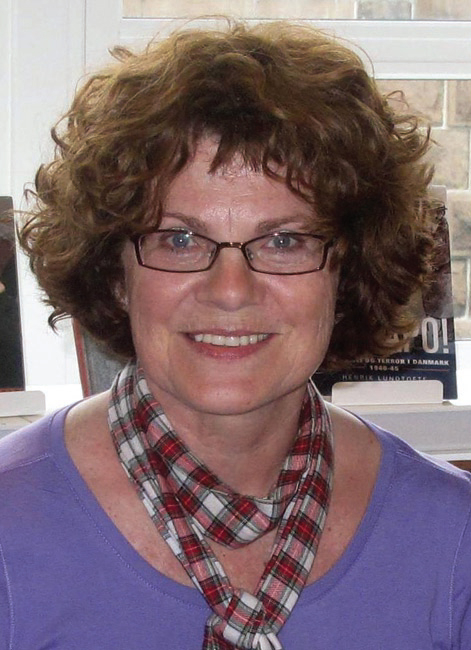 The narrator, who is in her sixties, now truly recognises that the journey will soon be coming to its end. This story of a mother whose life is drawing to a close offers glimpses of how life has turned out for her and her daughter. Hinumegin er mars (in English “March is on the other side”) is a poetic portrait of ageing emphasising that it’s all about taking a stand and enjoying every moment.

The mother lives alone, but is finding it harder and harder to look after herself. She is suffering increasingly from dementia yet receiving all too little home help. Getting a place in a nursing home is proving impossible, and we hear about the problems her children have in taking good enough care of her. Throughout the book they wait impatiently for the completion of the new nursing home that is being built, and the narrator hopes, somewhat ashamedly, that her mother will live to see it finished.

As the novel progresses she gradually disappears. At one point we are told that she has gone, that the person she once was is no longer there. A major aspect of the plot is the lack of care for the elderly, and we hear about home helpers talking to her as if she were a child instead of taking her seriously. Another theme that runs through the book is death and saying goodbye. When she arrives at the hospital, we know it will be for the last time. It is at this point that the focus shifts to grief.

Reflections on women’s role in life comprise an important element of the book. We are told about “an army of women” and their tasks, and that the narrator has both her mother and grandchildren to care for at this time in her life. She says that she chose to stop working so as to have time “to do everything I didn’t get to do, and which I’ve always longed to do.” The book tells of how she longed in particular to dedicate herself to writing, which she is now trying to find time for among all the care work.

The book is a combination of fact and fiction, and the narrator’s memories are interwoven with those of her mother, especially from her childhood. Brief glimpses allow us an impression of what life was like when she was a child, and we are treated to a beautiful description of a fishing trip with her father on which the young girl manages to bring her catch ashore all by herself. The mother too is described, as the happy, unusual, and modern mother figure of the daughter and her friends. She is the kind of person who, like widows and the elderly, always has visitors because, as the narrator explains, she observes two principles when she has guests which make them want to return: “Never complain!” and “Always look like you’re happy and surprised to see them!” The mother has managed to do this until now, until the onset of dementia.

The style is poetic – some chapters are almost poems in themselves – and despite the difficult topics that the book tackles, it is the poetry of life that takes centre stage. Life is described as a journey of different stages, and even if we are not always aware of being in one of the stages, we have to make the most of each one. This is what the mother has done, and the novel is an unconditional declaration of love to her and to life.