Skip to main content
Mail Facebook Linkedin Twitter Sign up to newsletter
Work on the creation of a borderless digital region that encompasses the Nordic and Baltic countries is on the agenda of a meeting between Nordic and Baltic ministers in Oslo today – the first to take place under the auspices of the new council of ministers for digitalisation.

“We’ll be following up on the ambitious goals we set at the “Digital North” ministerial conference in April. We want to make it easier for those living in the Nordic Region to access digital services across national borders. One of our objectives is to pave the way for residents of the Nordic countries to use their own secure login credentials, such as their personal identity number and electronic ID, regardless of where they are,” says Norwegian Minister of Local Government and Modernisation Jan Tore Sanner.

On 8 December, the Norwegian Minister of Local Government and Modernisation is meeting his Nordic and Baltic ministerial colleagues who are responsible for policy on digitalisation. The council of ministers has been given the designation MR-Digital. The co-operation will promote the digitalisation of public services across national borders, the digitalisation of business, and the development of a single market in the region.The objectives and measures will result in an overall digital boost throughout the region, which will also support the work of the EU. “This is a recognition of Norway’s targeted and ambitious digital venture which has resulted in the negotiation of a joint declaration during our presidency, paving the way for people to participate in a Nordic digital society regardless of where in the region they live,” says Sanner. Since the adoption of the declaration in Oslo in April, under Norway’s presidency and in dialogue with the Nordic Council of Ministers, the countries have laid the foundation for further follow-ups. Efforts are focused on two main areas - the development of a pan-Nordic digital identification (eID), and a strategy for the roll out of fifth-generation mobile technology (5G) in the Nordic and Baltic countries.During the ministerial meeting in Oslo, it was announced that Sweden will manage the development of 5G.  Norway leads continued efforts on eID  “A joint Nordic solution for digital identification for everyone living in the Nordic Region is a goal we have in our sights. The eID could be the single most important measure since the Nordic passport union in making day-to-day life easier for the region’s residents when they move to another Nordic country. The involvement of the Baltic countries is a strength for the Nordic Region,” says Secretary General Dagfinn Høybråten.

In 2017 the Nordic and Baltic countries made their mark in a broader international context. Global enterprises like Google and Amazon have voiced their support for the ministerial declaration. It demonstrates the region’s ambition and its position on the digital front line. Meanwhile, both Germany and Ireland have put Nordic-Baltic digitalisation on the agenda. Estonia is also an important country to work with, and Norway has been formally invited as a partner at Estonia’s conference in Brussels on 14 December to mark the end of its presidency of the EU.“Together we will ensure that our digitalisation venture provides added value for Europe, the single market, and international co-operation in general. The fact that countries like Estonia are supporting the Nordic-Baltic digital agenda is also important,” says Sanner.Sweden will take over the presidency from Norway in the new year. Sweden has ambitious plans for how it wants to develop co-operation on digitalisation further. 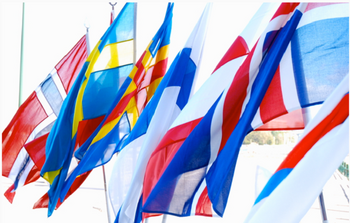