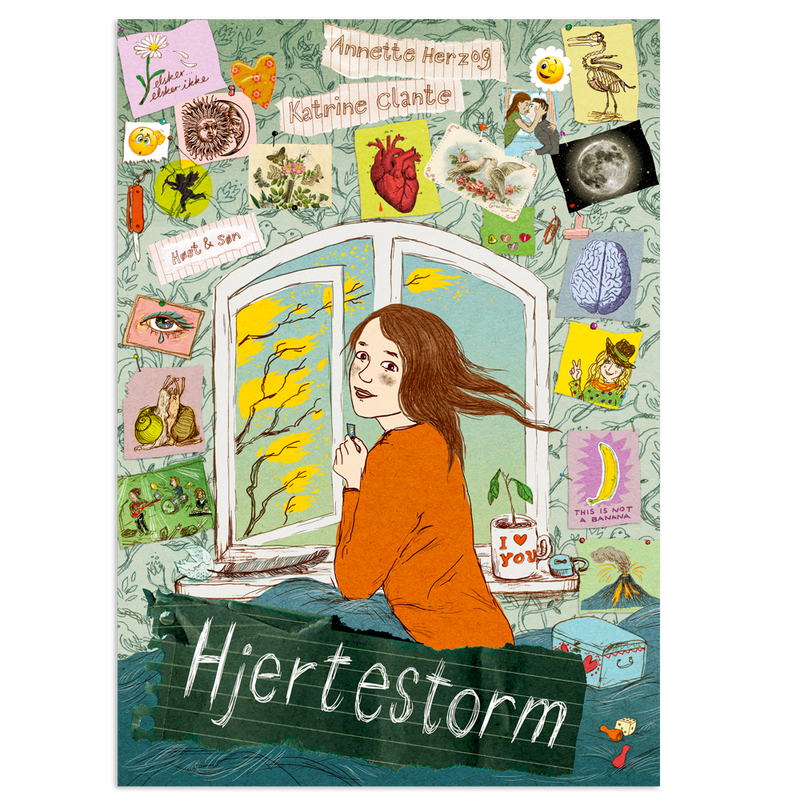 Hjertestorm – Stormhjerte (“Heartstorm – Stormheart”, not translated into English) is an intense and believable graphic novel, which depicts all of the insecurity, expectation and bewilderment of being 14 in a tone that covers the dejection and the humour, the lonely brooding and the sharp dialogue, the hesitant fumbling and the moments of excitement.

It is actually two books in one: Hjertestorm – Stormhjerte, which tell the stories of Viola and Storm, respectively, and all the anguish and chaos that comes with their nascent love.

Katrine Clante and Rasmus Bregnhøi each illustrated one of the stories. Their styles have much in common, but the artists’ lines and colours also subtly emphasise the (gender) differences between the two young people and the decisions they make. Clante is a tad rounder and more poetic in her portrayal of Viola than Bregnhøi is in his depiction of Storm.

The way Herzog builds up the two stories, which converge in middle of the book, works exceptionally well because she deploys a credible tone, unorthodox breaks with genre norms, literary and philosophical sources, informative material and, not least, advice from a couple of worldly-wise adults. With these tools, she creates order from the chaos that accompanies the fumbling hesitancy and hankering after signs that characterise 14-year-olds in love, and offers insight into the physical and emotional changes that prepare young people for adulthood.

This book approaches adolescence and growing up in a way that empowers young readers – especially if they read the section about the opposite gender.

It can also help adults learn about and offer positive guidance to young people.

While Storm and his father are mending a bike, his dad proffers some advice: “Try to be brave. The bravest thing of all is to dare to be yourself and not give a hoot what anybody else thinks.”

Viola tells her gran: “Storm kissed another girl. One of the good-looking ones who can have all of the boys she wants. I’ll never be one of them.” Her gran replies: “Why would you want ALL of them?”

Young people – and adults, for that matter – will learn a thing or two about life and love from these two stories. Everything comes together beautifully on page 65, when Viola and Storm both arrive on their bikes from their separate stories, each with a letter for the other.

Maybe they’ll fall for one another? Whatever happens, the readers will certainly fall for them.