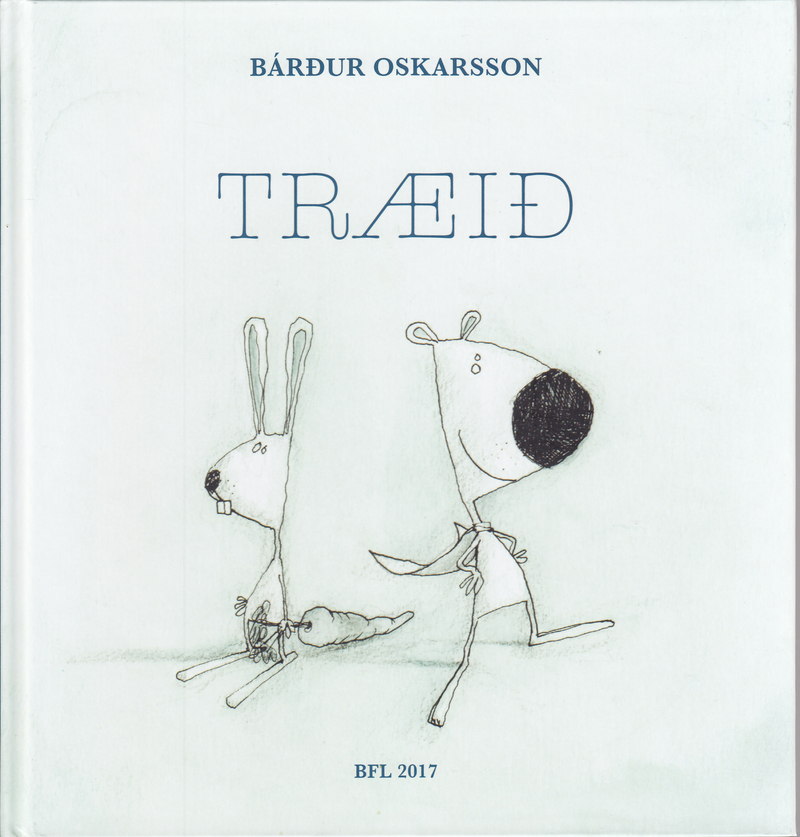 Bob the rabbit starts wondering about what might be on the other side of the tree. What could possibly be over there? He has only ventured there once and was chased away by a dog before his curiosity was satisfied. The tree and the thought of the exciting and the unknown on the other side still lure him, but he’s unsure if he dare go there again. Maybe it’s not even necessary? Maybe Bob can make do with what his well-travelled friend Hilbert says?

Although simple and naive, Bárður Oskarsson’s picture books are also clever. He allows his animal figures, equipped with familiar human attributes and feelings, to grapple with ethical challenges and existential questions without providing simple answers. Træið (in English, “The Tree”) is no exception. Using subtle humour he tells the classic, perpetually relevant tale of trying to become worldly wise – because who can you really trust? Is it worth the effort to see things with your own eyes? Is there anything important on the other side of the tree? Who knows?

The story of Bob and Hilbert is illustrated in Bárður Oskarsson’s characteristic minimalist, sensitive strokes. Expansive, almost monochrome surfaces provide space for meditative nuances and focus on the two friends’ expressive body language during their pensive encounter amid the grey humdrum of the everyday, where they sky is the limit and the tree now seems more distant.

Bárður Oskarsson (born in Tórshavn in 1972) is a picture book author, illustrator, and artist.

He made his debut as a children’s writer in 2004 with Ein hundur, ein ketta og ein mús, which won the West Nordic Council’s Children and Young People’s Literature Prize in 2006 and was given a special mention in White Ravens of the International children’s digital library that same year. Stríðið um tað góða grasið was similarly recognised in 2013.

Oskarsson’s books have been translated into Danish, Norwegian, Swedish, Icelandic, English, French, German, Slovenian, and Czech and have received numerous awards and accolades, including the 2007 Tórshavn Children’s Book Prize and the 2013 LUCHS Kinder- und Jugendbuchpreis for the German edition of Hin flata kaninin (The Flat Rabbit, Owkids books 2014, translated by Marita Thomsen). In 2015 he was awarded the Faroese Cultural Fund’s annual grant. In 2016, the Swedish edition of Ein hundur, ein ketta og ein mús was nominated for the Swedish Peter Pan Prize, and the English translation of the 2016 book Wilbert was included in the IBBY Honour List.

This is the third time that one of Oskarsson’s books has been nominated for the Nordic Council Children and Young People’s Literature Prize. His previous nominations were for Hin flata kaninin (The Flat Rabbit) in 2014 and Stríðið um tað góða grasið in 2016.