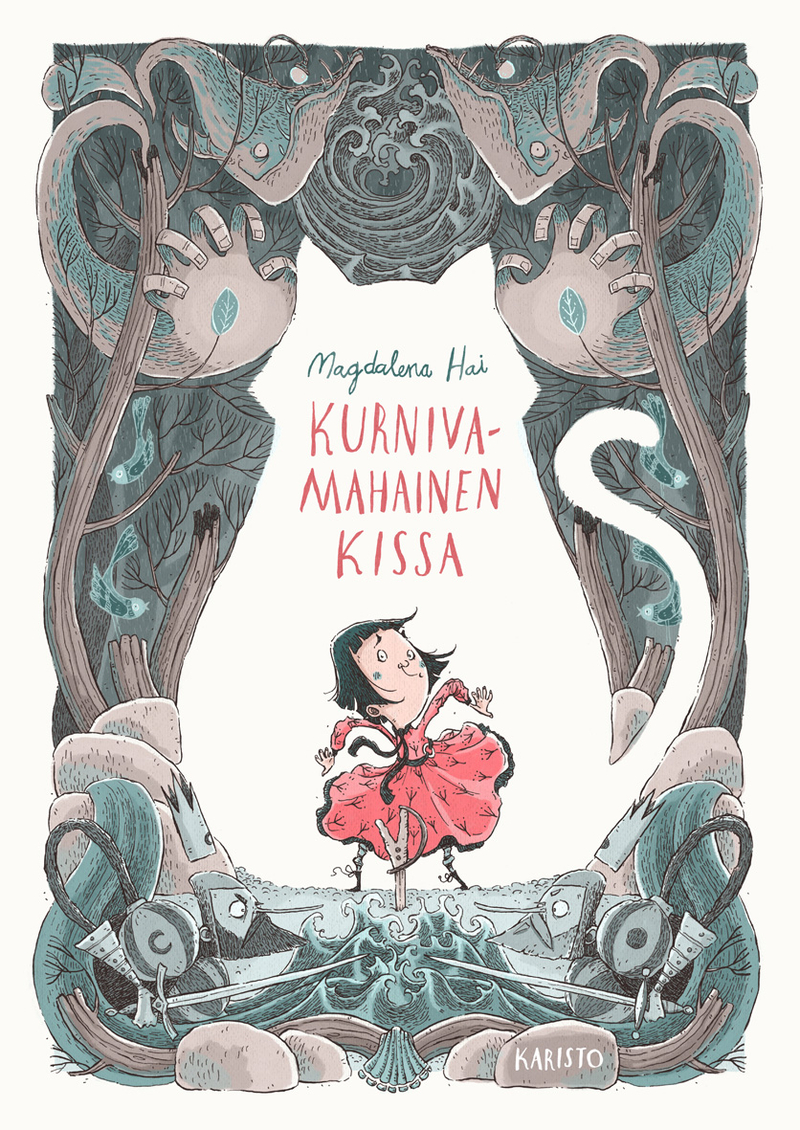 Magdalena Hai’s fairytale Kurnivamahainen kissa (in English, “The cat with the rumbling stomach”) is about a little girl with a huge cat. The girl lives in a world of scarcity, where drought and poverty are part of day-to-day life. One day the girl meets a cat with a rumbling stomach, and little by little she finds out why there is scarcity in the world. The cat with the rumbling stomach has eaten it all – the animals of the forest, the fish in the oceans, the corn of the villages, and finally has drunk all of the fresh water. The whole world could end up in the awful cat’s belly.

Ultimately the cat swallows the girl whole, leaving her unhurt. Down in the cat’s belly, she finds the whole world and its many wonders that the cat has swallowed. She also finds the cause of the cat’s eternal hunger. He goes by the name of Mr. G. Reedy, who has made himself at home in the cat’s stomach and swallows everything that makes its way down – Fiat Unos, horse-drawn carts, and loads of hay.

Hai’s text uses allegory to portray greed and its awful consequences in this fairytale that is neither moralistic nor educational, and where pedagogy is injected with a refreshing humour. Nevertheless, Hai’s fairytale is deeply moral. It is easy to see the devoured world as a representation of ecological disaster, and the novel conveys how miserable it is when people try to stockpile everything for themselves.

Kurnivamahainen kissa is hugely exciting, especially the truly awful characters of the giant cat who eats everything and Mr. G. Reedy, who gorges himself in the cat’s stomach. The protagonist, the cool and quick-witted girl, ensures that the excitement never becomes too much. The nicer side of the cat eventually appears when it gives up its gluttony in return for something much better – the girl’s friendship.

Hai’s insightful story draws on an array of literary tradition and myth. Kurnivamahainen kissa is above all an unadulterated fairytale which features typical elements of the genre, such as victory of the underdog and terrible opponents. However, Hai’s book revisits the tradition of the fairytale in a highly original fashion and adds new ingredients.

One myth that the work employs is the Bible story of Jonas in the belly of the whale, a myth often repeated in western culture, as in the Finnish national epic Kalevala. Hai’s story also borrows from medieval morality, personifying the virtues and burdens of being human. For example, in Kurnivamahainen kissa, Mr. G. Reedy is the embodiment of greed.

The work also benefits from nonsense literature as seen in the constant play with ratios of scale. The protagonist is incredibly small, while the cat with its rumbling belly is always growing or shrinking: “The cat, on the other hand, shrank and shrank until it was only the size of the world, then a house, then an elephant, then a horse.”

Although Hai’s book is aware of the many literary traditions it uses, the reader does not necessarily have to be familiar with western literary history to enjoy the book. Kurnivamahainen kissa is an independent work that will appeal to readers of many ages.

Teemu Juhani’s black-and-white sketches are a significant element of the work as a whole. Juhani’s playful illustrations follow the book’s fast-paced plot and contain a lot of movement and action, as well as a wealth of fine detail.

Magdalena Hai (born 1978) is a Finnish author whose children’s and youth literature has been published since 2012. Her works include speculative fiction, thrillers, and children’s books. Kurnivamahainen kissa has been nominated for several prizes in Finland (Arvid Lydecken in 2017, Runeberg Junior in 2017, and Tulenkantaja in 2018).

Teemu Juhani (born 1987) is a Finnish illustrator, cartoonist, and graphic designer, who currently works in London.