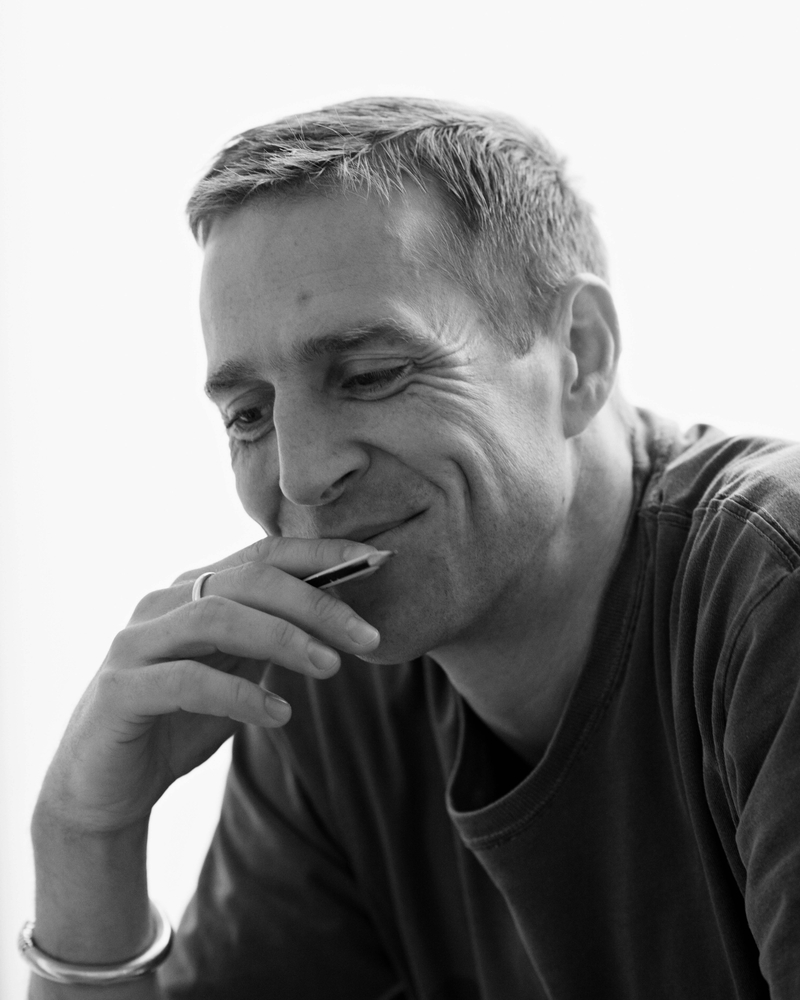 When Matias Faldbakken made his debut as an author in 2000 under the pseudonym Abo Rasul, he was already an established visual artist. In his last book, The Hills, and even more so in this, his latest novel, Vi er fem (in English, “We are five”, not translated), it is as if we are dealing with a whole new artist and writer. Style, tone, and environment differ greatly from Faldbakken’s earlier works, and Vi er fem also stands out from most other contemporary Norwegian literature.

The novel is an unlikely mix of a realistic family novel, rural narrative, sci-fi adventure, and horror all rolled into one. It is a testament to Faldbakken’s novel-writing abilities that these seemingly contradictory premises do not cause the story to bow down. Quite the opposite, in fact, as it is elevated into something completely unique, which could not exist anywhere other than in this novel.

Tormod and Siv live with their two children and dog in a house in Råset, three hours north of the capital. A seemingly ordinary couple and family, where the only break from normality is Tormod’s debauched past as an alcoholic, which Siv saved him from. They now live as a rather conventional family. Father works in the workshop, while mother “sees to” an episode of a series on Netflix, eating taffel sticks with a Coke Zero or a “glass of something soft” in front of the TV. And so the days pass. Until the dog dies, that is, and another substance enters their lives – a lump of clay, which Tormod receives as a gift from his old friend and brother-in-law. Constantly fed with new substances and materials out in the workshop, the lump of clay grows in size and strength like some aggressive type of sourdough until eventually it assumes the form of an active living being. And then the family is five again.

Vi er fem is characterised by unusual yet effective changes in tempo and raw yet warm humour. A sensual material reality is evident in the intimacy of day-to-day life (“Siv lies with her back to him, at the far end of the bed. Her spine looked like a large, unbaked loaf of bread in the moonlight”), in the depiction of physical labour, and in unusually strong and credible depictions of intoxication. The prose impresses even at sentence level, while alternative interpretations of contemporary Norwegian reality break through the humorous surface.

“Few people in Råset had the monster of ambition within them. This isn’t really a topic for us,” says Faldbakken’s omnipotent narrator, which suggests that the family can be regarded as the polar opposite of the urban middle class, whose existence is so often mirrored in art and public discourse. At the same time, this use of the term “topic” is characteristic of the novel, which takes a playful approach to analyses of a more societal nature, which does not necessarily make its social observations any less valid.

“The joy of the creator” is a phrase that often comes to mind while reading the novel. Tormod’s enthusiastic clay fantasy is mirrored in the novel’s own joy in conjuring original human portraits through playing with different styles and genres, often with elements of hackneyed phrases and formulations which are given new life and new meaning within the realm of the novel. At the same time, the joy of the creator is tainted, as Tormod’s dark and transcendent past resurfaces in the almost Frankenstein-like relationship between the creator and his clay creature. To say that Vi er fem is a kind of criticism of technology or social critique would denigrate a novel whose powerful vitality is expressed just as strongly in the portraits of children and rural realism as it is in the thematics of creation and the observation of social structures.