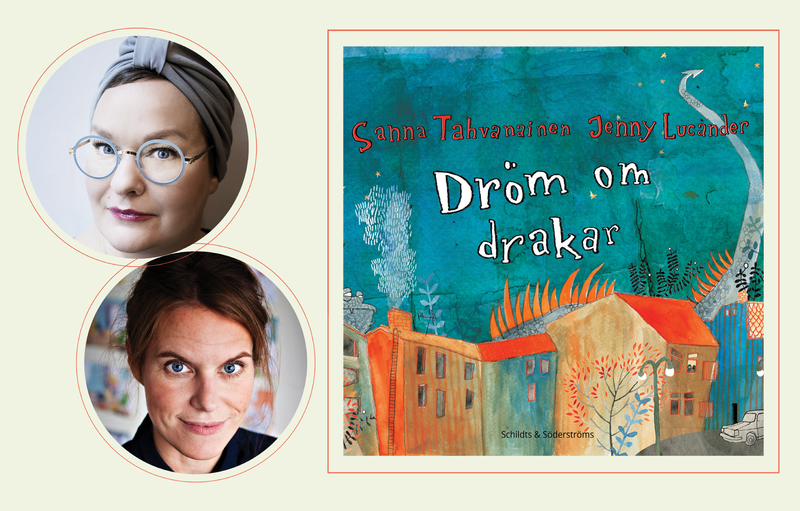 Dröm om drakar (in English, “A dream about dragons”) is an aesthetically evocative picture book. Given its profound and beautiful treatment of pressing themes it will appeal to a wide range of readers of all ages who can appreciate its delicate interweaving of words and pictures.

Sanna Tahvanainen and Jenny Lucander are writing and drawing their way into a tradition of picture books that examine the type of childhood that has emerged from the pace of life now demanded by working life. The pair have come up with a thoughtful contemporary depiction in the mother in a Marimekko nightie who cannot unwind until her daughter, Bella, whispers the book’s title, Dröm om drakar, in her ear long after bedtime. The picture book raises the question of what the role of the child is as the parents’ work piles up a mere screen click away. In Tahvanainen and Lucander’s work the child is given the role of comforter. Again and again, the adult world puts its faith in the child. And the child responds with imagination.

Tahvanainen’s earlier picture book picture Silva och teservisen som fick fötter (2011) is also about a mother-daughter relationship and a mother who just can’t carry on any more. Her minimalist, dialogue-rich text maintains a balance between the amusing and the worrisome. There is ample space for pictorial narrative, and the pictures reflect many specificities of the characters. It is set in a highly symbolic dream world where the mother learns again how to nurture and be present when caring for a newly hatched baby dragon.

Lucander’s pictorial narrative is at once suggestive and contemporary. The book makes full use of its landscape orientation. Beyond the residential buildings a primeval dragon is biding his time, while inside the buildings the reader can identify the odds and sods ensuing from consumerism. The collage-like style is both saturated and sheer, with colours blocked layer upon layer and combining to create a rich pictorial landscape. The turquoise and orange make for a dynamic combination, and in the carefully composed and artistically appealing whole there is a hint of poeticism.

Sanna Tahvanainen (born in 1975) made her debut in 1994 at the age of 19 with the poetry collection fostren. She has written novels, columns, radio plays, drama, and children’s books. Her latest novel, Bär den som en krona (2014), which portrays Queen Victoria from a bodily perspective, won her the Society of Swedish Literature in Finland’s prize. Jenny Lucander (born in 1975) is one of the artists featured in the touring picture book exhibition “BY”.

She has illustrated Flickan som blev varg by Sofia Hedman (2014) and Singer (2012) by Katarina von Numers-Ekman.