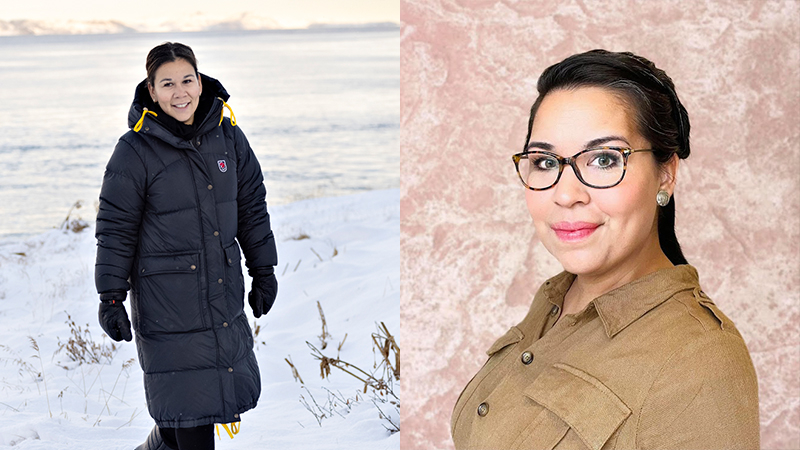 In this book, we follow Lily, a lively, outgoing Greenlandic city girl, from the age of three to the age of nine. The style and content of the book are formed by wonderful quotes from things that Lily, during her upbringing, has said to or asked her mother, the writer Sørine Steenholdt. The book is strongly and vividly illustrated by the artist Ivinnguaq Høegh Storch, who frames the quotes in a playful, colourful universe that is like looking into a beautiful and exciting kaleidoscope.

The book thereby becomes, not just a modern tale of how the brave adult world can be perceived and seen through the eyes and logic of children, but also a beautiful and colourful record of Lily’s universe over a six-year period. To Lily’s quotes, her mother Sørine has appended explanatory texts about when and where Lily has said these things, so that adults can understand the context in which Lily has come up with her remarks and questions.

And she is certainly curious, that Lily: She knows that Christmas takes place in winter, while the reindeer hunting season is in late summer in Greenland. Hence the logical question: “What does the reindeer hunting season have to do with Santa?” And the first time she sees a black hearse, she bursts out: “Look at that cool car over there with a bed in it.” Lily has been told that Denmark is a beautiful country, so when she first sails into one of Nuuk’s fjords, she asks: “Is this Denmark?”

The book’s humorous, fun and creative content is combined with the child’s emotional inner world, while acknowledging that life can sometimes be hard. The book touches on many themes, such as the digital world, Greenlandic as a world citizen, ethnicity, gender roles and gender identity, the relationship between Greenland and Denmark, etc., but overall, the relationship between mother and daughter is the focal point.

For each of the quotes, the artist Ivinnguaq Høegh Storch has created kaleidoscopically colourful illustrations from collages of digital photographs. These bind all the individual stories into a single, large, cohesive patchwork narrative, in which children and adults can immerse themselves in words and pictures, and talk about children’s logic versus how adults understand the emotional relationships between adults and children.

Lily does not want to be a little princess. She represents a modern Greenlandic girl living in Nuuk, and she is not afraid to speak her mind – including to her mother. She is a determined girl who is saving up her own money to buy a bigger trampoline. She donates her used clothes to the northernmost village in Greenland. In many ways, she resembles her mother. At school, when they ask the children what they would like to be when they grow up, Lily says: “I don’t know, but since I look so much like my mother, I’ll probably be a writer.”

Liberation and creating your own identity

“Who was my mother before you were born?” asks Lily. The typical emotions that a mother and daughter relationship involves – love, frustration, anger, gratitude, expectations, trust, security, etc. – are not skirted over here. There are no taboos, and in fact we also hear about the therapist Dorthie three times – Lily herself asks her mother to make an appointment for her. The bond of love between mother and daughter is strong, and that trust grows in Lily in such a way that the initial fusion between mother and daughter is gradually replaced as Lily starts to create her own independent meaning and identity as a child.

In her book, Sørine Steenholdt shows what a relationship of equality between child and adult can look like, and how Lily, as she matures and develops, is constantly trying to navigate her feelings and her relationship to her surroundings, which is something many children can relate to.

Sørine Steenholdt has previously published the short story collection Zombieland, which was nominated for the Nordic literature prize 2016.