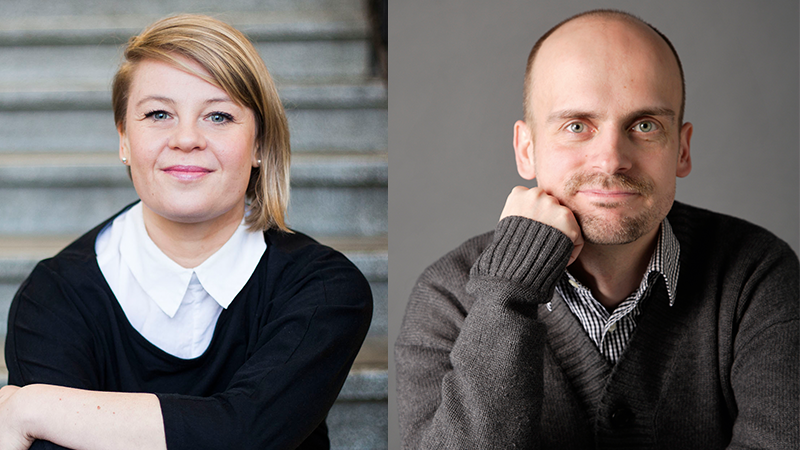 The picture book Sorsa Aaltonen ja lentämisen oireet (“The Duck who was Afraid to Fly”, not translated into English), written by Veera Salmi and illustrated by Matti Pikkujämsä, is a modern animal fable. The book’s title character is a duck who lives in the city and has lost the ability to fly, and whose daily life consists of queuing for food in the “cookie queue” and chattering with other birds. In secret, however, the duck Sorsa Aaltonen dreams of flying and has a longing to travel.

The world described in the book is full of disadvantaged and socially vulnerable characters. The cookie queue, where some of the birds get their daily food, refers to the real-world bread queues – which is to say, the growing inequality in the cities. As the narrator of the picture book describes the cookie queue: “This was where those birds whose dreams had not come true received today’s cookie ration”.

In the cookie queue, you boast of what little you have: who is going to have heart surgery, who has received a wheelchair, and who has even landed an actual job. Among the birds, one topic is talked about above all: when to fly south. When the duck Aaltonen hears them talking about it, he feels very left out. Aaltonen is a duck who “hasn’t been anywhere”. He can’t fly, he’s afraid of doctors, and for that reason feels that no one can be interested in him.

In the world of the picture book, however, urban poverty and the inequality of society are not described in a bleak and sad manner. Pikkujämsä's humorous illustrations in clear colours displace the serious content, and both the text and the pictures discover some marvellous beauty in the city: The sun shines like “the cream in a cake” and the most beautiful thing of all is to watch the lovely dance of the swans in the lake.

The way the book plays with different characteristics of birds is also cheerful. On the one hand the birds are like humans, and the book allows for a satirical reading by the adult in relation to city dwellers trying to outdo one another with their journeys to the south. On the other hand, the story also has an ecological dimension. In Finland, the term “cookie ducks” refers to urban birds that have stopped flying south in winter because humans feed them, and which then, when the winter comes, suffer from the snow and cold. Is Sorsa Aaltonen the victim of such urban feeding?

In Pikkujämsä’s naivistically colourful illustrations, the birds are birds, and the book’s diversity of species is delightful in its range. In the narrative text, bird sounds are contained in the inventive layout, and for the young reader there are many exciting things to study in the birds. A bag hanging over the shoulder of a bird is decorated with an egg pattern in a bird-like manner. The swans of the lake naturally refer to Swan Lake, one of the world’s most famous ballets.

The story ends happily. Sorsa Aaltonen ventures to go to the doctor and receives the diagnosis: fear of flying. In the duck’s opinion this sounds very fine, and the mere thought of his dormant ability to fly causes him to open up to his surroundings and see the world in a whole new way.

Veera Salmi (born 1976) is a Finnish writer who began her career as a children’s book author in 2012. She has written a total of 14 children’s books and picture books, as well as a young adult novel and a novel for adults. Salmi’s well-known books include, for example, the fantastically funny series about Puluboi ja Poni (in English ‘Pony and Pigeonboy’) and the picture book series Päiväkoti Heippakamu (in English ‘Heybuddy Nursery’). Salmi won the Kaarina Helakisa Prize in 2014, and has been nominated for numerous literary awards, including the Finlandia Junior Award in 2015. A Finnish children’s film has also been made based on the book Puluboi ja Poni (‘Pony and Pigeonboy’).

Matti Pikkujämsä (born in 1976) is a Finnish illustrator and graphic designer who has illustrated a wealth of picture books and poetry books for children since 2002. Pikkujämsä has won the prestigious Rudolf Koivu Illustrator Award, and has twice been nominated for the Finlandia Junior Prize for his illustrations.