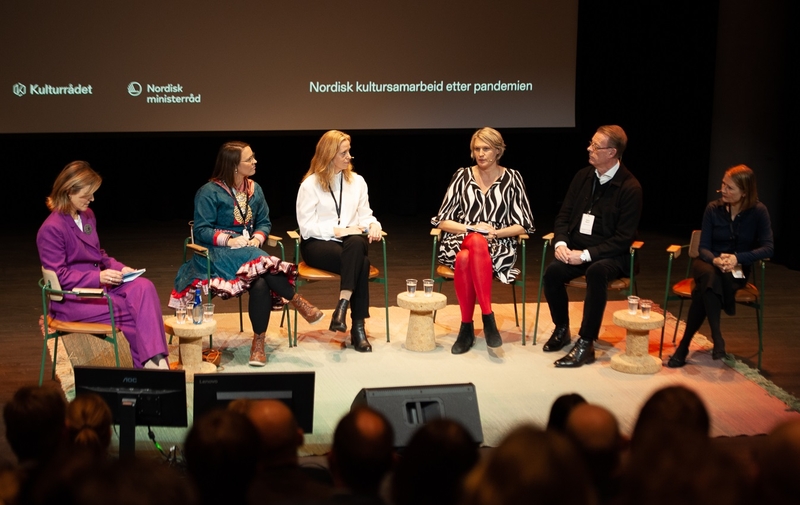 Photographer
Ida Børsand
Mail Facebook Linkedin Twitter Sign up to newsletter
Stronger co-operation between the Nordic countries can contribute to a faster recovery after the pandemic and better equip the cultural sector to navigate future challenges. That was the message from politicians, researchers and cultural practitioners who attended the Nordic culture policy summit in Oslo on Tuesday.

It was Arts Council Norway that, on behalf of the Norwegian Ministry of Culture and Equality, brought together participants from the Nordic countries to discuss and share their knowledge and experiences of the Nordic post-pandemic cultural scene. For Anette Trettebergstuen, Norway’s Minister of Culture and Equality, the year spent as chair of the cultural sector in the Nordic Council of Ministers has given her insight into how specific Nordic co-operation can be and the potential it brings:

“Nordic co-operation is something quite special. It’s something that we create together and I’ve experienced it over the past year. This applies not only to the immense benefit that we’ve been able to draw as ministers from our meetings and discussions on the pandemic in the different countries, but also to future opportunities for Nordic cultural co-operation in an increasingly uncertain global context.”

The challenges are global

International co-operation within the field of culture was deeply affected during the pandemic by way of cancelled events and lockdowns. Even though the Nordic Bridges cultural initiative in Canada was postponed for a whole year due to the pandemic, the restrictions in Canada were still strict when the programme opened in January 2022. Marah Braye, CEO of Harbourfront Centre in Toronto, who chairs Nordic Bridges, talked about her experiences of keeping the production going for a long time.

“These delays that were not planned, afforded Habourfront Centre, our 20 program partners in Canada and the Nordic artists being presented, to actually deepen and cultivate their relationships and allowed the work that were presented more time to ripen, if I can put a positive spin on some of the hurdles that we faced.”

Has the cultural scene recovered after the pandemic? No, according to the research

Although it’s too early to see the long-term consequences, the pandemic exposed vulnerabilities that researchers expect will form the basis of future discussions on culture policy.

Jenny Johannisson from the Swedish Agency for Cultural Policy Analysis pointed out that the consequences of the pandemic for the cultural sector have been extensive, highlighting significant shortcomings in the economic and social conditions for artists and other stakeholders in the industry. Furthermore, the analyses show that differences between those who participate in cultural life persist even after the pandemic.

Haakon Bekeng-Flemmen, Senior Adviser at Arts Council Norway, pointed out that the pandemic presented a new situation for all countries and that looking at the turnover of the industries, which received huge amounts of funding based on economic criteria, was a new way of working.

A panel of researchers in cultural policy from Sweden, Finland and Norway agreed at the meeting that now that the pandemic is over, there’s a huge need for knowledge about new cultural habits and the cultural economy, as well as a need to look at the consequences of digitalisation on culture policy.

Unreasonable expectations in respect of artists

Art and culture are seen as cornerstones of Nordic co-operation, and there are far-reaching and complex expectations for their role in society. However, these must be seen in relation to the major consequences that the pandemic has had for the cultural scene.

“Artists are expected to come up with new things. They must press on and show what life and reality are all about. At the same time, they’re expected to work based on a vocation, get involved and not, like the rest of us, fall ill or receive financial support,” says Maria Hirvi-Ijäs, Senior Researcher at the Centre for Cultural Policy Research (Cupore) in Finland. She continues:  “There are no unemployed artists – only those without income!

The funding structure is another important issue for co-operation on culture policy. Research shows that those who create culture often have high levels of education but relatively low incomes.”

Cross-border co-operation is the way forward

More Nordic and bilateral dialogue, meetings, and the opportunity to share experiences are at the top of the wish list for all the representatives of national cultural authorities, as well as those from Nordic and Sami cultural institutions who participated in the panel discussion. One of the big issues discussed was what role culture should play when resources are transferred to other sectors of society.

“We need to invest in the core of the arts and culture. During the pandemic, we saw that the self-employed artist couldn’t get on and do, and we should do something about that. We need to renew the structures for culture policies,” says Paula Tuovinen, director of Taike (Arts Promotion Centre) in Finland.

Sami art is the future

In recent years, Sami art has received increasing attention, both in the Nordic Region and internationally, most recently during the Venice Biennale where the Nordic Pavilion this year was a Sami Pavilion. But despite the increased interest, the lack of resources is obvious, said Christina Hætta, head of the Sami Council’s culture department:

“Sami art is becoming the Nordic Region’s next export, but everyone needs to work together in order to make it possible. National culture policy is challenging for Sami artists who move across national borders, and we hope that national funding schemes can be better tailored to the conditions of the Sami cultural sector.”

Maja Kristine Jåma of the Sami Parliament, Norway, has a positive view of continued Nordic co-operation: “If what’s been said here today is followed up on, that’s incredibly good news. We Sami are a borderless people and we experience obstacles to freedom of movement every day. This became especially clear during the pandemic.