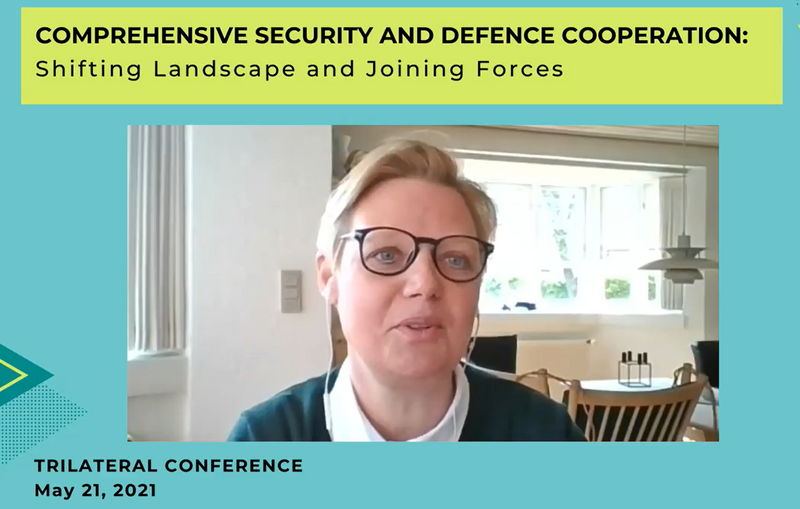 The Vice-President of the Nordic Council, Annette Lind, gave a speech on cyber security.

Mail Facebook Linkedin Twitter Sign up to newsletter
The Nordic Council, the Baltic Assembly and the Benelux Parliament met on Friday to discuss working together on defence and security. The agenda included how well equipped the countries are to deal with cyber threats and the ever-changing security situation. It was the first time that the three organisations have discussed defence and security issues at a joint meeting.

The Baltic Assembly – the interparliamentary body for co-operation between Estonia, Latvia and Lithuania – had invited the Nordic Council and the Benelux Parliament to the online meeting.

The President, Bertel Haarder, and the Vice-President, Annette Lind, both from Denmark, led the Nordic Council delegation to the meeting. The President stressed the importance of international co-operation at a time when the security situation is becoming increasingly tense, and a number of authoritarian regimes have been identified as the perpetrators of multiple cyber attacks.

“Multilateralism and the rules that govern the global order are under threat. The best way to face those threats is for countries to work more closely together. The Nordic countries are a prime example of this. We work well together on defence and security, despite slightly different national security policies. Our co-operation threatens nobody. It contributes to stability. I think we can say the same about Baltic and Benelux collaboration and for that matter also co-operation between all three of our regions,” he said.

The Vice-President focused on hybrid and cyber threats. One issue she mentioned was the Nordic Council’s strategy for societal security published in 2019, which identified cyber threats as an important area on which to work together.

“The work to combat hybrid and cyber threats is a top priority for the Nordic Council. Part of our societal security strategy calls on our governments to work more closely with the Baltic nations on cyber security. We are seeing massive cyber attacks on our democracies. Fundamental Nordic values such as democracy, human rights and the rule of law are under heavy pressure, and we must deploy all our resources into winning that battle,” said Lind, who is also the Danish Social Democrats’ spokesperson on cyber security.

The Nordic Council is the official body for Nordic inter-parliamentary co-operation. It has 87 members from Denmark, Finland, Iceland, Norway, Sweden, the Faroe Islands, Greenland, and Åland. The Baltic Assembly consists of members of the parliaments of the three Baltic states. The Benelux Parliament consists of members of parliament from Belgium, the Netherlands and Luxembourg.