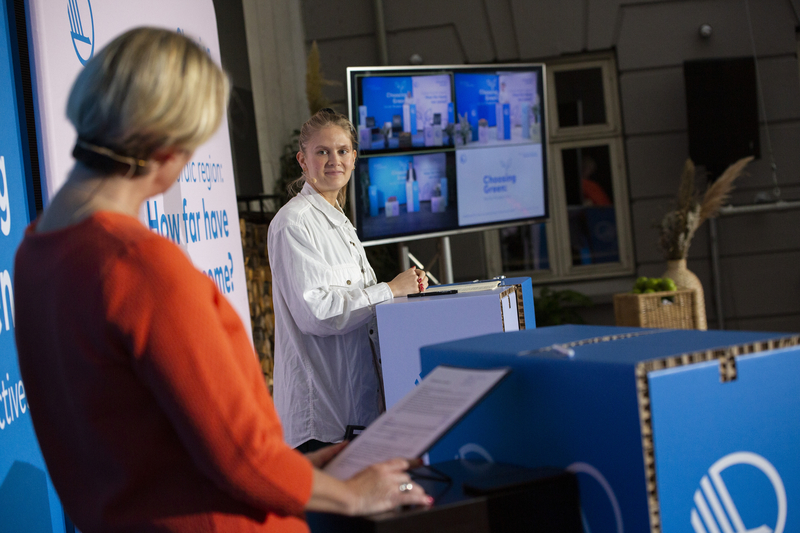 Emma Holten, panellist in one of the debates at Choosing Green.

Mail Facebook Linkedin Twitter Sign up to newsletter
Choosing Green drew more than 50 representatives from youth organisations, industry, social organisations, NGOs, researchers, climate activists and politicians to discuss the green transition in the shadow of the COVID-19 pandemic. The Nordic Council of Ministers’ will consider all of the perspectives brought up on the day as it prepares for the climate negotiations at COP26 in Glasgow.

This was supposed to be the year of the climate, with negotiations at the COP26 summit playing a crucial role in global efforts to combat rising temperatures. The fact that the summit has been postponed for a whole year has not held back Nordic drive or ambition shone through clearly at “Choosing Green” yesterday.

Six debates covered complicated questions about the role of the Nordic Region in global efforts to combat climate change and the challenges of bringing about a socially sustainable green transition. How do we get everybody on board? How can the Nordic welfare model help – and perhaps even serve as a good example – to achieve social justice? The consequences of the new green reality for jobs, competitiveness and, in particular, for the education sector were also among the issues raised.

“Leave no one behind”

Speakers expressed strong support for the principle of “leave no one behind” and repeatedly drew attention to the negative social consequences of climate work for already vulnerable groups. They also highlighted the size of the Nordic carbon footprint, asking whether our lifestyle is really something worth imitating? No, that would be catastrophic, the panellists replied. They also mentioned that we live in a world where 10% of the population use over 50% of the resources.

Closer Nordic co-operation was also a recurring theme stressed by several panellists. Paula Lehtomäki, Secretary General of the Nordic Council of Ministers, highlighted the many opportunities presented by the established Nordic political community.

“The Nordic Council of Ministers offers a platform for countries to share information and best practices. We face many of the same challenges, but we also share many of the solutions. Let’s make even better use of that.”

The Nordic Council of Ministers’ will consider all of the perspectives brought up by the panels, keynote speakers and audience as it prepares for the climate negotiations at COP26 in Glasgow.

Watch all six debates here.
Interested in research in this field? We have published a range of resources he…

Choosing Green was a full-day event organised by the Nordic Council of Ministers and the Nordic Region in Focus. The six debates covered three themes, and more than 50 panellists shared their knowledge and discussed the green transition in the light of the COVID-19 pandemic.

Read more about the event here.

Download press photos from the event here.
Contact information
Mikael Carboni Kelk
mikake@norden.org
+45 60 39 42 57
Choosing Green
A digital summit on post-corona green recovery in the lead up to COP26.
How can we help you?
More