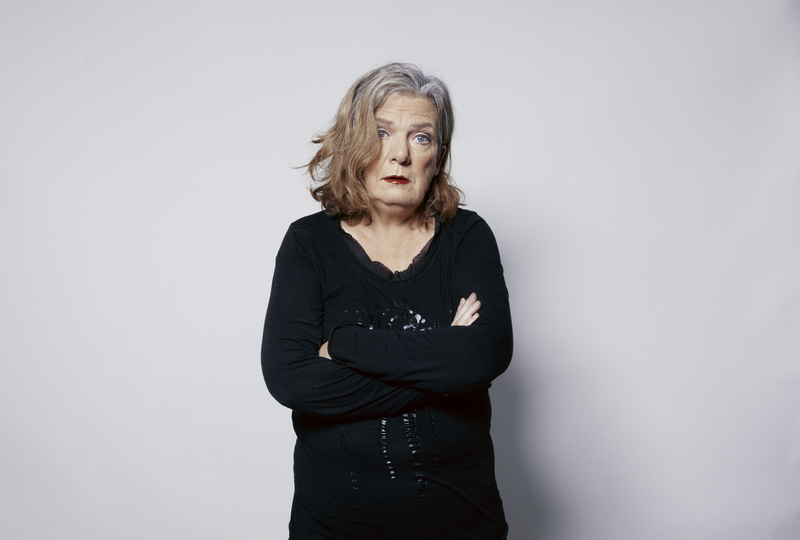 “Dead. Dead. How could it happen? What did that word mean?” That’s how Elísabet Jökulsdóttir opens her autobiographical novel Aprílsólarkuldi (Eitthvað alveg sérstakt). Frásögn um ást og geðveiki og huggun (‘Cold April Sun (Something quite special). A tale of love, insanity and solace’, not translated into English). In this work, she applies the methods of poetry to investigate what happened when, in the late 1970s, at the age of around twenty, she suffered a bipolar disorder and experienced a degree of impotence and shame that she has since spent a large part of her life trying to penetrate and convey in her art.

The novel is about a girl called Védís who, on the brink of adulthood, faces the disaster of losing her father and being unable to cope with the resulting emotions. Her father’s death forces her not only to face the transience of human life, but also to realise how her upbringing in an alcoholic family with its outward concealments, chaos, conflicts, her mother’s fury and distanced relations have shaped her personality and emotional life. She has grown up using language to deceive herself and others – not saying what she means, and not meaning what she says. She has been indoctrinated since childhood to suppress all her emotions and freeze them, because there is nothing so dangerous as emotions. Védís’ grief at the loss of her father is tinged by anger and longing, which she does not know how to handle or articulate. Moreover, it becomes complicated for her to mourn her father, whom she feels she actually lost long ago – or perhaps never had. The greatest sorrow in Védís’ life is that she was never allowed to experience a carefree childhood.

Shortly after this death, in the midst of a nervous breakdown, Védís meets Kjartan, and the love between them melts her inner ice, so that she gives way to her emotions. However, their relationship is characterised by a hunger for love and by the constant consumption of intoxicants, with associated obsession, fear, anxiety and depression.

Elísabet Jökulsdóttir’s description of how Védís, as a result of her illness, gradually loses her hold on reality and believes she can see and hear various messages in her surroundings that are hidden to others, is masterfully executed. The unbridled style and humour that prevails on the surface hides a sombre undercurrent. In her aesthetics, the clear, naive text strongly appeals to the child that Védís was never allowed to be, but whom she tries, in her powerlessness, to care for. Elísabet Jökulsdóttir sensitively and poetically treats subjects that are difficult to deal with, and adds a magic that leaves no one untouched.

In the more than 30 years since she published her first book, Elísabet Jökulsdóttir (born 1958) has been an important voice in Icelandic society. With honesty, insight, humour and frankness, she has touched her readers and directed their attention to problematic issues such as love in all its forms, intoxicants of various kinds, violence in relationships, mental illness and mental health. She has published poems, short prose, short stories, novels and plays. Alongside her literary activities, Elísabet Jökulsdóttir has performed various other tasks, and was for example honorary artist at the art festival ‘Sequences’ in autumn 2021. Elísabet Jökulsdóttir was awarded the Icelandic Literary Prize in 2020 for Aprílsólarkuldi. She has twice received the Icelandic women’s literature prize, Fjöruverðlaunin (the Fjara Prize): the first time in 2007, with her autobiographical novel Heilræði Lásasmiðsins (‘The Locksmith’s Advice’, not translated into English), which is a kind of sister book to Aprílsólarkuldi, and again in 2015 for the poetry collection Ástin ein taugahrúga: Enginn dans við Ufsaklett (‘Love – a nervous wreck: No dancing at the fishing rock’, not translated into English). In the following year she was nominated for the Nordic Council Literature Prize for the same book.