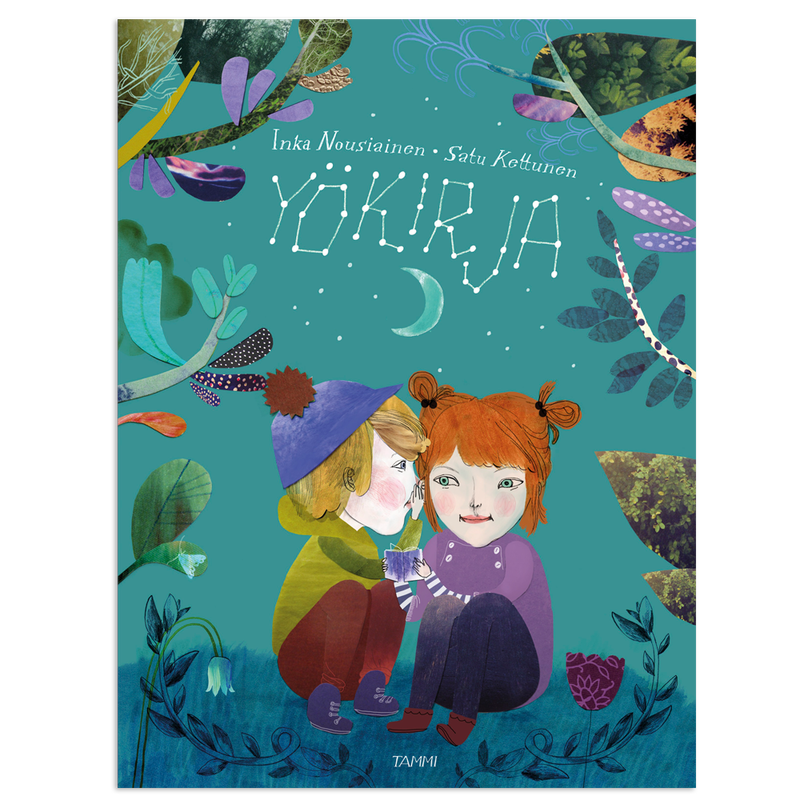 “Have you ever kept a night diary?

I’ve long yearned to ask somebody that question. And then, finally one night, under a slightly cloudy sky with stars like matte paper, I climb the hill and know that it’s time.”

Yökirja (“Night Diary”, not translated into English), written by Inka Nousiainen and illustrated by Satu Kettunen, is a tale of silence, friendship, feeling different and being accepted for who you are. The main character in the picture book is a sensitive and thoughtful six-year-old boy called Kuu (Moon). The name alludes to his unusual condition – he’s allergic to sunlight. During the day, he has to wear a protective suit. Only the lonely nights offer respite. One night, he meets Raa under a tree and finds that he can talk to her about anything.

Yökirja is both realistic and fantastic. Nousiainen’s story is multifaceted and full of symbols. Linguistically speaking, the names Yö (Night) and Raa (a reference to the Egyptian sun god Ra) are opposites, but the two children soon find they have a lot in common despite their differences. In fact, their differences form the basis of a close friendship, as creature of the night Yö teaches Raa, who is used to life during the day, to write a night diary.

This is a lyrical, philosophical book. Flowing, ambiguous language combines with luminous illustrations of colourful night-time visions, providing plenty of food for thought and a great read for all ages. The apparently simple story doesn’t underestimate its audience, and new meanings emerge with each reading.

The depiction of the characters is unusually sensitive and credible. Kuu and Raa’s friendship is used as a vehicle to address important themes about relationships – between children and in general – e.g. accepting those who are different. At first, Kuu doesn’t tell his new friend that he wears a protective suit during the day, but his trepidation is blown away by Raa, who thinks the spacesuit is brilliant. Instead of poking fun, she exclaims enthusiastically: “Wow!”

The text and illustrations in Yökirja interact effortlessly and complement one another. The words relate Kuu’s thoughts, background and life, while the illustrations open up both his inner reality and the external world around him. This slow, lyrical tale, with its colourful and imaginative illustrations, invites the reader to contemplate the nature of emotion and friendship. Although the book contains plenty of fascinating details and fun activities, in the form of the games the children play, Yökirja also leaves room for silence and sadness:

“Sometimes I fall silent for no reason. And sometimes the silence becomes so overwhelming that I don’t have room for it at home. So I have to send it somewhere else. Somewhere it’ll feel better. I send my silence to Raa.”

In the world of the book, the negative and positive emotions are relative in the same way as Kuu and Raa’s obvious differences are relative. Raa has a tendency to cry when she finds something really beautiful. Happiness and sadness go hand in hand in Yökirja. There is room for fear and worry in the dark of night, of course, but also for happiness, friendship and play.