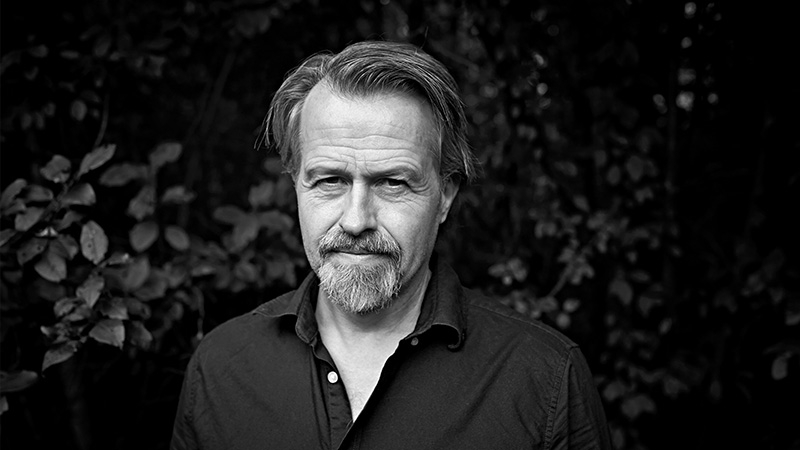 A little boy misses his cat, Georg. It’s been several days since Georg disappeared. The boy and his dad go out to look for him. They look all over the place, but Georg is nowhere to be found. Could it be that he’s been run over? Could he be…dead? What happens when someone dies?

Georg er borte (“Georg is gone”, not translated into English) is a picture book about bonding, falling in love, and losing someone and grieving for them. It’s also about coming to terms with the fact that death touches us all. The boy himself is telling the story. His voice is filled with childlike wonder about life’s questions, big and small. Dad takes the boy’s questions seriously.

The book’s visual language features geometric shapes and a subdued natural palette. The images are grainy and reminiscent of old, blurry photographs, which can symbolise life’s fleeting yet persistent nature.

Sharp lines clearly outline selected things, people, and nature. Where the clear lines are absent, the colours spill into each other, removing the distinction between the various elements. This means that some motifs are highlighted, they get their own glow and uniqueness, whilst other parts of the image look more obscure and secretive in the background. This also reflects how we as humans experience life through sensory perception. We notice certain things, whilst we overlook others or see through them. Consequently, different things end up having different meanings for us.

The proportions of the motifs are enlarged or diminished from image to image and signal where the focus lies – both in the external dramatic action and as part of the boy’s inner experience of what’s happening at any given time.

Both the text and images have a somewhat airy feel. The minimalist expression allows the reader to fill in the story with things, memories, and colours from their own inner being.

Georg er borte is a witty, bittersweet little gem of a book with a distinct style. Its plot has a timeless quality. The visual language is sober, and the topic encompasses not only simple day-to-day comedy but also the complex existential and psychological aspects of being human. The end also brings new hope.

To care about someone comes at a cost, but it’s worth every penny.

RAGNAR AALBU (born 1966) is a Norwegian picture book author and illustrator who has received many awards for his books. He was nominated for the Nordic Council Literature Prize in 2016 for his picture book Krokodille i treet (which translates as Crocodile in the tree) and has received the Norwegian Ministry of Culture’s prizes for children’s and young people’s literature three times. His books have been purchased for the Norwegian National Library’s collection of book illustrations, and he’s been represented in Martin Salisbury’s book PLAY PEN – New Children’s Book Illustration (2007) and in Gestalten Verlag’s Little Big Books – Illustrations for Children's Picture Books (2012).