The ability to communicate usually presupposes a common language, but ​​there are enough similarities for Danish, Norwegian and Swedish speakers to understand each other. For historical reasons, Danish has enjoyed a strong position as a foreign language in Iceland, and Swedish is one of Finland’s two official languages. As part of the same kingdom, Danish is strong in Greenland and the Faroe Islands. Swedish is the official language of Åland.

The main source of regulation for language co-operation consists of the four agreements: the Helsinki Treaty, the Cultural Agreement, the Language Declaration and the Nordic Language Convention.

Similarly, the Cultural Agreement is based on an objective of enhancing and intensifying co-operation between the Nordic countries – in this case, in the cultural sphere. The purpose of the agreement is to help increase the overall impact of national investment in education, research and other cultural activities, and ensure that the countries work together to develop the Nordic cultural community, e.g. by “promoting teaching in the other Nordic countries’ languages, cultures and social conditions [...]”.

The Language Declaration (the Declaration on Nordic Language Policy) defines priorities for each country’s national work on language policy. In other words, although it points in an overall direction, each country has its own responsibilities at national level. Different national considerations mean, therefore, that not all of the countries focus on the same issues at the same time. The focus of the declaration is on the following areas of language policy: teaching in Scandinavian languages ​​as neighbouring languages ​​and as foreign languages; parallel language use between English and the main Nordic languages; the multilingual society and multilingual citizens; and the language of official agencies (plain language use). Every two years, the Nordic Council of Ministers submits a report to the Nordic Council on how the countries have followed up on the Language Declaration.

The Nordic Language Convention also applies. The convention, which entered into force in 1987, is legally binding for all five Nordic countries. The convention is aimed at governments. Its purpose is to help ensure that Nordic citizens, in certain contexts, are able to communicate in their own languages with official bodies in other Nordic countries. Responsibility for following up on the provisions in the convention rests with the appropriate national agencies, while national legislation safeguards individual rights.

The Secretariat to the Nordic Council of Ministers co-ordinates co-operation on languages in the education sector. The Nordic Committee of Senior Officials for Education and Research (EK-U) acts as the steering group for the work. Four types of courses are available for teachers, student teachers and university students: Nordkurs, Nordsprog, De Nordiske Perler and Nordiske Sprogpiloter. The focus of all of the courses is on language comprehension and knowledge in and relating to language and culture. There are also two networks: the Nordic Language Councils network and the Nordic Sign Language Network.

Several funding options are available for language-related projects in the Nordic Region.

Stakeholders in the Nordic and Baltic countries can apply to the Nordplus programme.

Nordic Culture Point is responsible for the administration of the culture sector’s various funding schemes, several of which can be relevant sources of funding for language projects. These are:

Culture and language projects in which children and young people are directly involved in the planning and implementation may also apply for funding from NORDBUK or VOLT.

In some cases, it may be relevant to apply for funding for language projects from the Nordic Culture Fund.

Action plan for Vision 2030
Contact information
Peder de Thurah Toft
pedtof@norden.org
+45 60 39 42 96
The Nordic languages
Mutual understanding of each other’s languages promotes mobility between the Nordic countries and enhances the sense of affinity between the peoples of the Region. The main focus of the work to promote language understanding, both now and in the future, is on children and young people’s understanding of written and oral Danish, Norwegian and Swedish.
How can we help you?
More 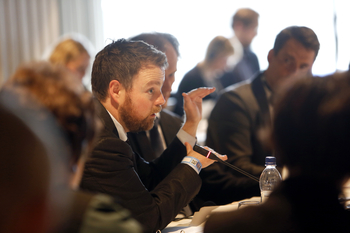 The Nordic Council of Ministers for Education and Research (MR-U)

About the Nordic Council of Ministers for Culture (MR-K)

The ministers for culture of the Nordic countries, the Faroe Islands, Greenland, and Åland have overall responsibility for cultural co-operation within the Nordic Council of Ministers. Th...