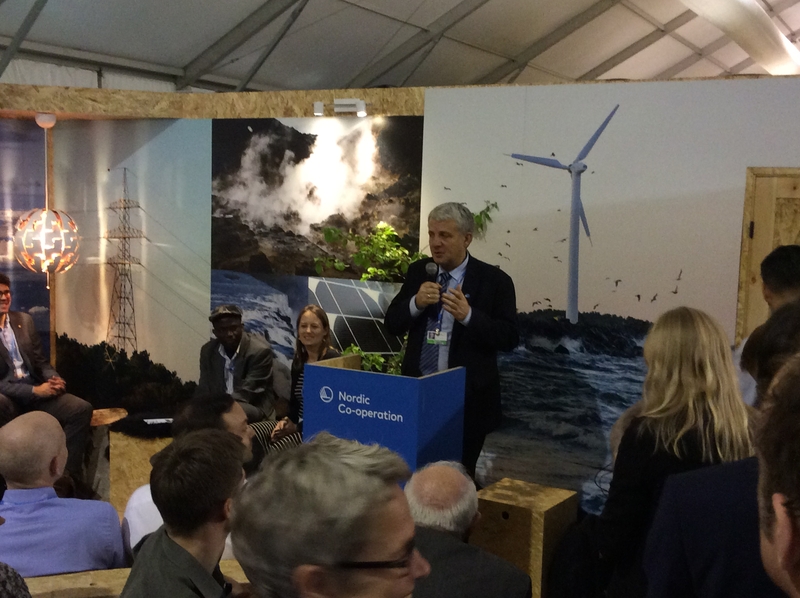 Mail Facebook Linkedin Twitter Abonner på nyhedsbrev
Results from the Nordic Prime Ministers' Initiative, The Nordic Region – leading in green growth, were presented at COP22 on 16 November. Notable outcomes include further development of the Nordic electricity market, allowing for a higher share of renewables, opportunities for creating thousands of jobs through utilising waste as a resource, and improved market surveillance of energy-consuming products and green buildings.

The Nordic Prime Ministers launched their Green Growth Initiative in 2011, with the vision to create societies based on sustainable solutions, but which also foster economic growth.

“We’ve made significant progress towards a green transition with this initiative,” said Secretary General of the Nordic Council of Ministers, Dagfinn Høybråten, in his presentation at the Nordic Pavilion at COP22. He highlighted the initiative’s strong focus on education and research into green growth. “This initiative spans the entire education spectrum from children to adults, from students to researchers, with the common objective to involve the next generation in the transition.”

An important driver of green growth in the region is the Nordic electricity market, which is one of the most integrated macro-regional energy markets in the world.

“Our strength is that we’re able to trade energy across borders, which allows us to integrate large shares of intermittent renewable energy sources,” says Annika Rosing, Head of Department of Growth and Climate at the Nordic Council of Ministers. The market is under constant development. “More interconnectedness towards Europe would further enhance the flexibility in the Nordic energy system, allowing us to integrate even more renewables than today.”

Also the waste sector represents potential for green growth, based on reducing food waste and increasing reuse and recycling of textile and plastic waste. As an example, the annual consumption of new textiles in the region is 350,000 tons, but only one-third of used textiles are collected.

“Our study shows that we could double the amount of textiles collected, reused and recycled,” says Rosing “This restructuring could potentially create over 4,000 new green jobs.”

The IISD’s Global Subsidies Initiative (GSI) has looked into the potential of phasing out fossil-fuel subsidies around the world. Global fossil-fuel subsidies amount to USD 500 billion per year, while subsidies for renewables are merely a quarter of that amount. This means that 13 per cent of all global carbon emissions are actually incentivised.

“We’ve modelled the impact of subsidy removal for 20 countries, using their energy data,” says Laura Merrel, Senior Researcher at IISD and GSI Operations Manager. “Across the 20 countries, we found an average 11 per cent reduction in emissions from phasing out fossil-fuel subsidies by 2020. By reinvesting 30 per cent of savings in energy efficiency and renewables, average emissions reductions would be 18 per cent.”

Whereas abatement of CO2 normally comes at considerable cost, phasing out fossil fuels results in average savings of USD 93 per ton of CO2 abated. This leaves room for Governments to invest in health, education and infrastructure.

“It’s a windfall gain, both financially and environmentally, to phase out fossil-fuel subsidies,” says Merrell. “In order to make a lasting impact on emissions, the countries need to be encouraged to invest the savings in a sustainable energy transition.”

A new Nordic Prime Ministers’ initiative on climate, energy and sustainability, Nordic Solutions to Global Challenges, will be launched in January 2017. The initiative consists of five flagship projects, focusing on sustainable cities, integrated energy markets and renewable energy. Also the efforts on fossil-fuel subsidy reform will be carried into the new initiative.

“The global community has set ambitious goals in the Paris Agreement and the 2030 Agenda for Sustainable development,” says Høybråten. “Nordic countries have built some of the world’s most sustainable, smart and attractive cities, we have a strong expertise in renewable energy, and we’ve created an integrated, regional electricity market enabling us to handle large amounts of renewable energy. We see it as our obligation to take part in finding solutions to these pressing global issues.” 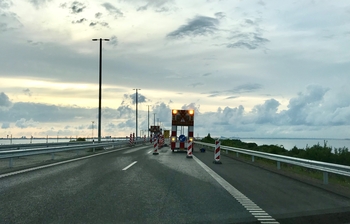 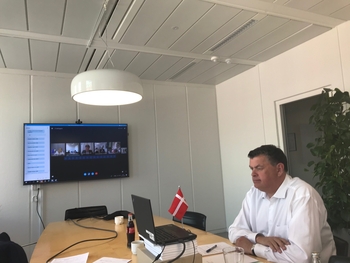