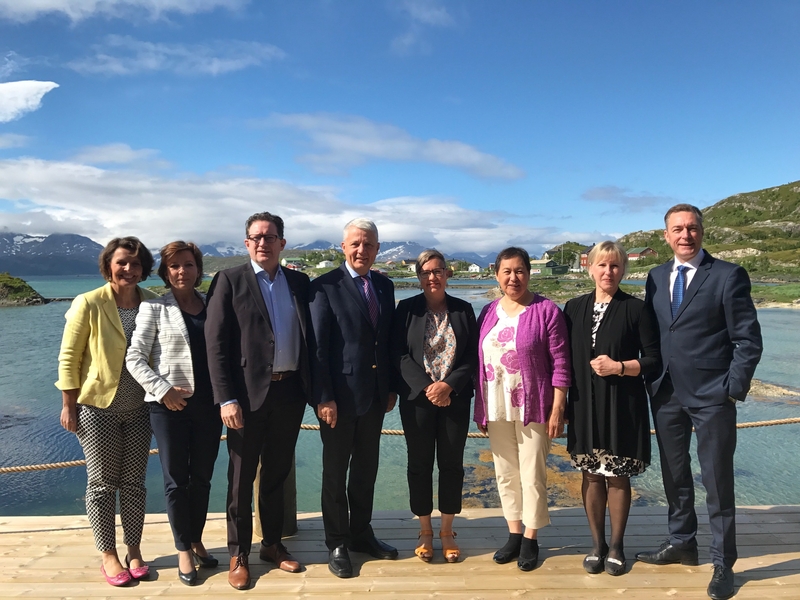 Photographer
Mary Gestrin/norden.org
Mail Facebook Linkedin Twitter Sign up to newsletter
Nordic and Nordic-Baltic co-operation must leverage the potential of digitalisation more efficiently. Far-reaching and flexible co-operation and the sharing of experiences on the digital transition benefits citizens, businesses, and the region’s public administration. At their meeting in Sommarøy in Norway on 22 June, the Ministers for Nordic Co-operation made the decision to establish a fixed-term council of ministers, MR-Digital, for the period 2018 to 2020. This temporary council of ministers has been tasked with leading and co-ordinating efforts relating to co-operation on digitalisation.

The new cross-sectoral council of ministers will focus specifically on developing a digital single market in the Nordic-Baltic region in accordance with the guidelines of a ministerial declaration signed at the Nordic-Baltic ministerial conference ‘Digital North’ in Oslo in May of this year.

“If MR-Digital’s efforts are to be a success, it’s essential that we’re able to define common principles for the free movement of data,” says Norway’s minister for co-operation Frank Bakke-Jensen, who chaired the meeting. He stresses that cyber security and the protection of citizens’ personal data forms the basis of all digitalisation efforts.

Co-operation on digitisation also has the backing of the Nordic prime ministers who, at their meeting on 30 May, voiced their support of the idea of establishing a temporary council of ministers for this purpose.

The Nordic Council of Ministers has undergone a modernisation reform in recent years.  One of the objectives of this reform was to make the work of the Nordic Council of Ministers more dynamic and flexible so as to increase its political relevance. “A focus on digitalisation and the establishment of an ad hoc council of ministers for this purpose is completely in line with this objective,” says Bakke-Jensen.

DKK 1 million in start-up capital has been set aside in the Nordic Council of Ministers’ budget for 2017 for the preparation of a specific and focused co-operation project linked to the goal of creating a digital single market. Sufficient resources have been secured for the period 2018 to 2020 to realise the objective.