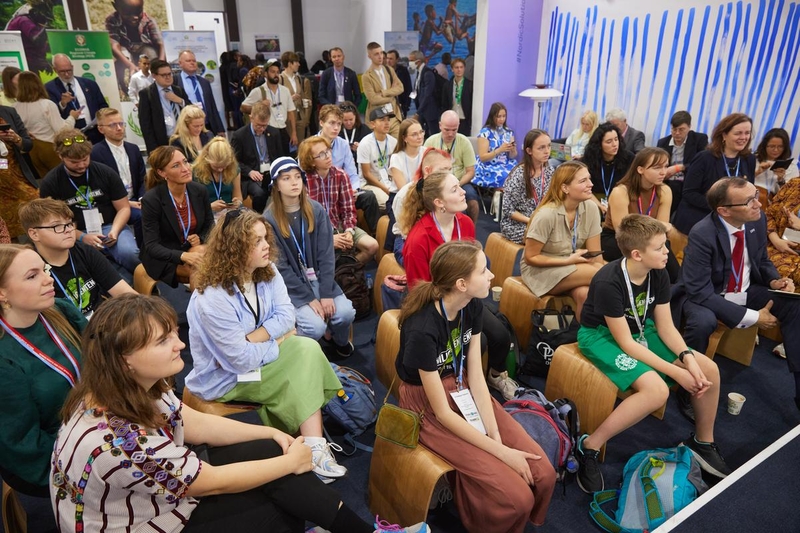 Stop searching for and phase out all fossil fuels, stop subsidising and investing in the fossil-fuel industry, increase climate finance to the global south, and lead by example by promoting global co-operation and climate action.

Goals are good, plans are better, and implementing those plans is better yet.

The event took place on Tuesday 15 November at the Nordic pavilion at COP27 in Sharm El-Sheikh. Here, representatives from the organisations Changemaker (Norway), the Icelandic youth delegates to the UN, the Green Youth Movement (Denmark), the Finnish National Youth Council Alliance, and Push (Sweden) took the stage to state their demands in front of a large crowd that had gathered in the pavilion.

"These decisions will directly impact our future and the future of our children so we must have a say in them,” the letter states. With the letter, youth organisations are urging politicians to take concrete climate action and include young people in policy discussions.

Norway's Minister of Climate and Environment, Espen Barth Eide, took to the stage and responded:

"We agree with you. I think we have incredibly important tasks ahead of us. At a recent meeting between the Nordic climate ministers, it was decided that we want to be leader among leaders, in the sense that Europe is leading the way on decarbonisation with Fit for 55 and the European Green Deal. Within that framework, the Nordics want to take a leading role in demonstrating how this can be done in practixe. Goals are good, plans are better, and implementing those plans is better yet," he said.

Finland's Minister of Social Affairs and Health, Hanna Sarkkinen, and Iceland's Minister of Food, Fisheries and Agriculture, Svandís Svavarsdóttir, also made remarks. The State Secretary to Sweden's Minster for Climate and the Environment, Daniel Westlén, and the Head of Department at the Denmark's Ministry of Foreign Affairs, Elsebeth Søndergård, were also present.

"The future we want - Nordic young people's demands for Nordic climate action" was signed by:

Read the letter to the Nordic governments here:

Skrá
COP27_-Nordic-Youth-demands-for-Nordic-Climate-Action FINAL.pdf
Tengiliður
Josefine Carstad
joscar@norden.org
(+45) 22 35 70 13
COP27: Nordic Solutions
The Nordic Pavilion will cover a wide range of topics on climate change and solutions at COP27 in Sharm El-Sheikh, Egypt, from 6 to 18 November.
What solutions do we have? And what solutions do we still need?
Hvernig getum við aðstoðað þig?
Meira