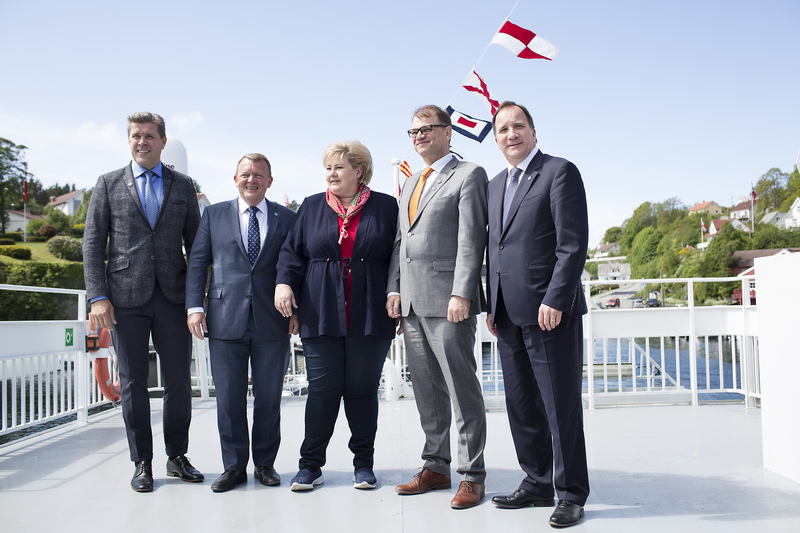 Ljósmyndari
Silje Katrine Robinson/norden.org
Mail Facebook Linkedin Twitter Áskrift að fréttabréfi
The five Nordic governments are prepared to take the lead in implementing the Paris Agreement. “We stand by our promise to future generations” was the prime ministers’ shared message following the announcement that the US is leaving the global climate agreement.

On Thursday, in a joint letter to the US President Donald Trump, the Nordic prime ministers urged him to “make the right decision” and remain in the Paris Agreement.

Later that evening Donald Trump announced that he intends to leave or renegotiate the agreement that aims to keep the global temperature increase below two degrees Celsius.

There were many strong reactions from the 193 countries that have signed up to the agreement expressing their sadness and disappointment at the US’s decision.

On Friday the Nordic prime ministers along with many other world leaders confirmed their unwavering support for the Paris Agreement.

On Tuesday 30 May in Bergen, the Nordic prime ministers launched a global initiative, Nordic Solutions to Global Challenges, in which climate efforts are an integral part.

At the launch, Katherine Richardson who has been appointed as an expert in the UN scientific monitoring group for Agenda 2030, said that the transition to renewable energy is starting to stand on its own two feet and cannot now be stopped.

“I honestly don’t think Donald Trump is a serious threat to the movement in terms of moving to renewable energy,” said Richardson.

Through the initiative, the Nordic prime ministers want to contribute Nordic climate and energy solutions in order to accelerate the implementation of the Paris Agreement and the UN’s Agenda 2030.

“The Nordic initiative is important because the Nordic countries have a unique opportunity to bring energy solutions into the market. I think we should operate as planned,” says Richardson.

One of the fundamental ideas is to use the Nordic Region as an example of sustainable development that does not conflict with economic growth.

“All the Nordic countries have a vision and concrete plans to become fossil free. Moving to green energy will boost the economy. Our common electricity market will also help to reach the target. We need to push the green transition even more – there is simply no time to waste,” comments Juha Sipilä, Prime Minister of Finland.