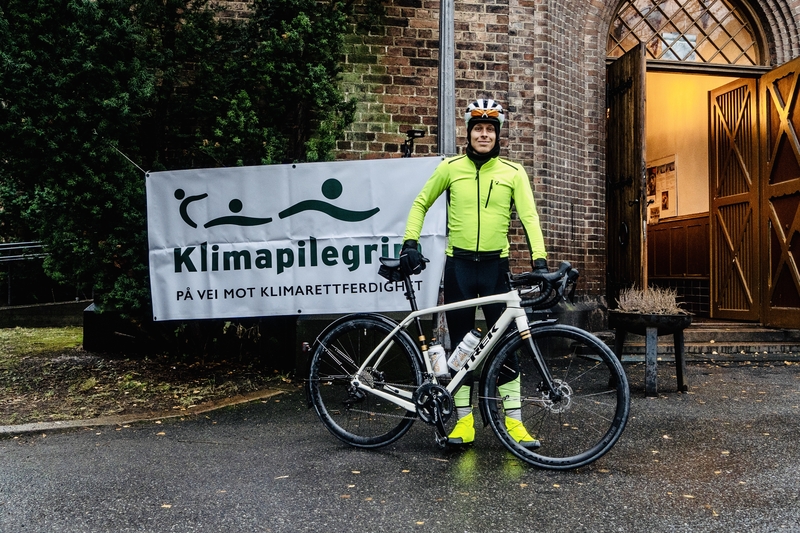 Professional cyclist and climate activist Jonas Orset (28) is once again hitting the road in connection with UN climate negotiations.

Mail Facebook Linkedin Twitter Áskrift að fréttabréfi
Last year he cycled from Oslo to the climate negotiations in Katowice - 1,400 kilometres in the cold and snow. This December, environmental cyclist Jonas and his team Green Cycling Norway will again don their winter gloves and join their green cycling companions on a trip from Oslo to Stockholm to emphasise cycling as climate-friendly during Nordic Climate Action Weeks.

The association wants to inspire children and adults to get on their bikes more. Together with four other cyclists from the Nordic Region, they will cycle to Stockholm to take part in Nordic co-operation’s Nordic Climate Action Weeks starting on 7 December.

The conference is a virtual back door to the UN climate negotiations in Madrid taking place from 2 to 13 December. Nordic co-operation invites Nordic residents who are passionate about the climate to join us in Stockholm for an insight into what’s happening at this year’s climate negotiations, and what Nordic co-operation is doing to achieve its objective of becoming the most sustainable region in the world. There’s no doubt that bikes will become increasingly important going forwards.    “Leaving the car at home and getting on your bike instead is one of the most sustainable things you can do. It’s good for the environment, and good for your health,” says Mary Gestrin, Head of Communications at the Nordic Council of Ministers.

The aim of Tour de Climate is to raise awareness on the climate and the unmatched qualities of cycling as a key tool in the fight for sustainability.

Find out more about Tour de Climate on Jonas’ blog

“We were incredibly impressed when we met Jonas after he’d cycled from Oslo to Katowice last year. We think that the fact that he and Green Cycling Norway are riding to our event in Stockholm is also worthy of praise. We don’t expect cycling to become people’s preferred method of transport between the Nordic capitals, of course, but we believe initiatives such as these can help to put the spotlight on cycling and the climate, while role models like Jonas and Green Cycling Norway help to inspire more people to get on their bikes,” says Gestrin.

The entire trip is being documented by a film crew. Green Cycling Norway wants to include more people and address issues and solutions related to the climate and sustainable development on the way.    “We hope as many people as possible can attend when Tour de Climate arrives at Norrsken House in Stockholm on the evening of Saturday 7 December,” says Gestrin.